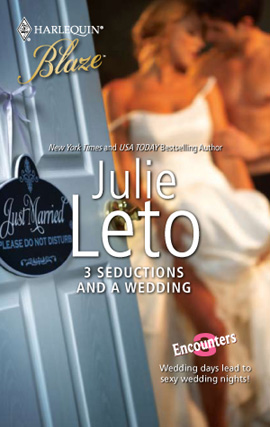 3 Seductions and a Wedding

Why wait for the wedding night?

Jessie might not forgive Leo for his long-ago betrayal, but after one scorching kiss, she can’t fight the chemistry anymore. But a girl can’t base her future on great sex. Or can she?

Can hunky Drew convince his longtime crush Annie that he’s the man for her? All he has to do is sweep her off her feet…then make her forget that he’s a much younger man….

When playboy billionaire Ajay is ready for real commitment, he thinks sexy, sensible Mallory is his woman. Too bad her only desire is to experience his reputed prowess in bed!

Annie swallowed hard, trying not to salivate as Drew Brighton strode toward her from across the parking lot. Suddenly, the private airfield where he’d arranged to meet seemed tightly enclosed rather than wide open to the sky. Dawn was at least a half an hour away and yet, the pink light standing sentinel above her van illuminated him just enough to make her insides flutter. Long, sandy brown hair. Perfect shoulders. Cocky stride. And his face-if she’d known him back when she was taking pictures for a living, she might have switched to fashion photography and made a mint on his cheekbones alone.

Hell, with his lips and fawn-colored eyes, she could have bought a Cessna aircraft like the one sitting on the other side of the hangar. Sleek and modern and powered by twin jet engines, she’d spied their ride on her way into the airport and she couldn’t help compare the man to the machine. Both were powerful and more than likely, both were fast. But where the aircraft wore its skin taut to its body, Drew preferred a more leisurely mode of dress. His shirt, a loose-fitting cotton button down with dark green alligators on a sea of off-white fabric, only hinted at the musculature underneath-pecs, abs, delts and obliques that she’d memorized just over a year ago when the company he owned, the appropriately named Hunks With A Truck, had transported all her worldly possessions from Jacksonville to Tampa.

A lot had changed since then. At the time, watching him tote one end of her peanut butter and jelly-stained couch, shirtless and sweaty, had made her feel like one of those desperate “cougars” she’d read about in women’s magazines.

Now, with the next forty-eight hours free of all encumbrances and responsibilities except to make sure that her future sister-in-law looked gorgeous on her wedding day and irresistible on her wedding night, the memory made Annie want to growl. And possibly, pounce.

But those instincts weren’t going to hasten them to New York City and Annie, who hadn’t been north of the Mason-Dixon Line in eight years, couldn’t wait to get into the air. She tamped down her suddenly reignited libido and gave Drew her sweetest smile.

Unfortunately, he only had eyes for her luggage.

“You know,” he said, pushing his long hair out of his eyes with the kind of casual grace only a man in his twenties could master, “I might make a living as a mover, but I was kinda hoping to get this weekend off.”

She looked at her baggage and tried to remember the days when she could survive three weeks in Thailand on a single pair of jeans, two t-shirts and a thong.

“I didn’t know what I’d need,” she said. “So I guess I just brought everything.”

He gave the largest bag an exploratory lift.

“Got your driver’s license in this thing?” he asked.

“No, it’s in my purse,” she said, indicating the massive leather tote that, a long time ago, had been her favorite camera bag. And after that, a diaper bag. Now, it was an all-purpose carrier of everything from water bottles to chewing gum to, she suspected, a confiscated sling-shot and a half-eaten bag of Doritos.

“And your favorite lip gloss?” he continued.

“I have a sister, which means I know that no self-respecting woman goes anywhere without her favorite lip gloss,” he explained with a full-on, melt-your-insides smile that must be lethal to girls his age. It was doing amazing things to her and she was old enough to be…well, his older sister. Or at the very least, his cool aunt.

She tried to quell a chuckle, but failed. She did indeed have a favorite gloss. It was a boring shade of taupe, but had just enough gold sparkle mixed in to make her feel pretty when she most needed it and a faint chocolate flavor that made it worth the trouble of application.

“Also in the purse,” she replied.

“I sense a pattern.”

He picked up her smallest suitcase.

“Personal items,” she said before he asked.

He nodded, slung the overnight bag onto his shoulder, then tossed her big bag filled with jeans, sweaters, a couple of pairs of pants and one nice blouse, in addition to pajamas, belts and several selections of snacks, extra shampoos and antibacterial wipes into her minivan and slammed the door shut.

He fished her keys out of the noisiest pocket of her purse and pressed the lock function. “Did you really need all that stuff, or are you just so accustomed to not going anywhere without the entire contents of Walmart that you did it on reflex?”

She opened her mouth to deny his accusation, but shut it promptly. He was right. The motto of the Boy Scouts might be “Be prepared,” but she was fairly certain it had been coined by the first Boy Scout’s mother.

“What about my clothes?”

A gleam flashed across his intoxicating champagne-colored eyes that, in anyone else, Annie might have thought implied that she wouldn’t need any clothes for the next two days. But this was Drew. Bianca’s brother. Bianca’s younger brother.

She simply was not that lucky.

“Aren’t we going to New York to shop?” he asked.

“I meant clothes for me,” Annie replied. “We’re filling Bianca’s trousseau in Manhattan, not mine.”

“My bank statement,” she replied.

He waved her off. “Let’s not worry about details. I was supposed to spend this weekend on a gambling junket. Saved the money from the last time I left Vegas with a profit. Now, we’ll have fun in New York instead. And if that includes picking up a couple of things for you, that’s cool. Now, let’s move. I want to be in the air before sun-up.”

Drew started toward the tarmac, nothing if not decisive. Only a year ago, he’d taken what had been the most chaotic time in her life-the emotional and gut-wrenching move out of her marital home-and turned it into blip on the radar that was her life. He’d directed every aspect of packing up her world, from the porcelain doll she’d found in a Dresden antique shop to the complete set of Cars toys her sons had collected from McDonald’s. He’d kept her boys occupied with little jobs like counting boxes or filling cartons with Styrofoam peanuts while she’d spent a day and half surreptitiously ogling some of the hottest guys she’d seen since the summer she’d spent as team photographer for the Brazilian futbol league.

Without Drew, the move could have spun into a maelstrom destruction, not only for her, but for her sons. Only five and seven at the time, Andy and Will hadn’t understood why they had to leave their Thomas the Tank Engine bedroom behind or why they were leaving town when their daddy was on yet another business trip. Wouldn’t he be mad when he came home and found the house empty? How would he know how to find them?

Her boys had no way of knowing that their father probably wouldn’t have noticed they were gone. Devoted to nothing but his job, her ex worked eighty hours a week-and that was during Christmas. She and the boys had been reduced to photographs he kept on his desk to impress clients.

The divorce had been quick and decisive-but thanks to a fit of raging guilt, her ex had been generous in the orders for child support and alimony. She’d always been frugal, but she could afford to spend a little on herself. Just this once.

The last new thing she’d bought for herself was the t-shirt she was wearing-a brilliant purple, form-fitting number that hugged her curves and made her boobs look much perkier than they actually were.

In fact, her whole body felt a lot livelier since Drew showed up.

Drew led her through a hangar. In addition to several other planes, she caught spotted his sleek, red convertible. As he snagged a battered leather haversack from the passenger seat before motioning her to follow him out the large double doors at the other end of the building, she recalled tooling around in a similar car the year she’d spent in France, Italy and Spain with a ne’er-do-well author who’d hired her to shoot the images for his book on the origins of the kiss.

The publication had been a boon to her career, and the affair she’d had with the author hadn’t been so awful, either. Yet again, she was reminded about how her life had changed so drastically in the past decade. She’d put her career ambitions aside to raise her boys and as to affairs, she hadn’t had one of those since she’d met her now ex-husband.

But this wasn’t the weekend for regrets. The next three days were about Coop and Bianca and their incredible journey to matrimony, which hopefully, would turn out better than her trip down the aisle. Unlike her, her brother had found precisely the right woman-at exactly the right time.

Leo’s suggestion that they plan and execute a surprise wedding for Cooper and Bianca couldn’t have come at a better moment. Her ex’s parents, recently retired to the other coast, had her sons for the entire week. Though she’d arranged for them to return home to attend their uncle’s wedding, this was the first time she’d been without her children in almost nine years.

And as much as it went against every motherly instinct she’d acquired, she deserved a little fun.

Maybe a lot of fun, she thought, as Drew leaned out of the plane and extended his hand to help her up the stairs. Her insides might have actually liquefied at his chivalry if she didn’t know that he was just being polite.

Well, maybe her insides melted a bit anyway, especially when she registered how nice his callused male palms and slim fingers felt against her skin. She wasn’t used to an adult male showing her any attention, even for the sake of manners. Most guys caught sight of her flanked on either side by her punks-known to everyone else as her adorable sons-and ran for the hills.

But Drew had liked the boys.

Probably because there wasn’t that much of an age difference.

Okay, that wasn’t fair. Drew wasn’t a boy. No, there was nothing boyish about him-except maybe that smile.