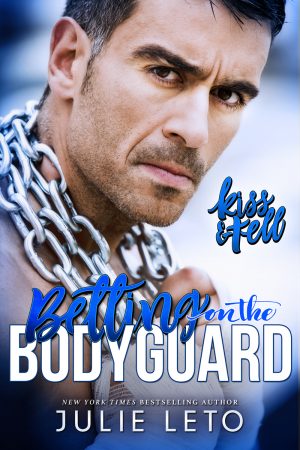 Betting on the BODYGUARD

An alpha male meets his match!

Brandon Chance has spent a lifetime living up to his name, first as an Army pilot and now as a bodyguard. But weary of risks and long-shots, he returns to sultry New Orleans hoping to find a nice, uncomplicated woman and settle into a simple, risk-free life. But he’s dealt an unexpected hand when Serena Deveraux, his childhood partner-in-crime, shows up in need of his services. Serena not only has a stalker, but her free-spirited sexiness calls his bluff. She is the ultimate wild card. When she ups the ante with an indecent proposal, will he fold or go all-in?

A brand-new, updated super-sexy contemporary romance! Although originally released in 2001 as a Temptation titled “Pure Chance,” this new version is longer, with new characters, storylines and just plain better writing.

Serena turned around completely, clutching the counter behind her. He was joking.  Teasing.  Flipping one of her switches.

“You’re not serious,” she said.

His grin gave away nothing.  “Well, maybe not sleep together.  But in the same house.  Under the same roof.  In the same room, if you don’t have a guest—”

“I have a guest room,” she assured him.  “But don’t you think you’re taking this too far?”

He shrugged, rolling his broad shoulders so that her lungs constricted.

She really did love his shoulders.

“Seems like a reasonable precaution. I haven’t had a chance to secure the house.”

“I have Maurice for security,” she reminded him.

“He’s a marshmallow.  You said so yourself.”

“So the first solution that pops into your head is to invite yourself for a sleepover?”

As delicious as the prospect sounded, having Brandon in her house all night long was more than she bargained for.  A few hours?  Sure.  Late into the night?  If necessary.  But the more time she spent with him, the harder it was to tune out the thrumming attraction she thought she’d conquered a decade ago.

Leave it to Brandon to take things too far.

“Seems like the smartest course of action.  So,” he said, crossing the narrow kitchen in two steps so that the countertop dug into the small of her back, “there’s only one question you need to answer.”

She swallowed deeply. “One?”

Her voice wavered.  He wasn’t playing fair.  Something had changed in the past few seconds.  It was as if Brandon had doubled in mass and was filling her house with more masculinity than a hundred and fifty year old structure could hold.  He invaded her space as if he were three of four very large men.

Except he was just one man—one handsome, powerful, sensual man.

Suddenly, the thought of him showering in her bathroom and sleeping just a few feet away in the spare room seemed more like a challenge than a threat.

“Drew?  I don’t need Drew’s permission for you to stay the night in my house.”

She also didn’t need to call him.  She’d already arranged for him to show up, so the issue would be on the table whether she liked it or not.  Her whole plan had hinged on him dropping in and finding Brandon in her house, hanging out, relaxed, with hints of the old times smoothing over their years apart.

She was certain this would do the trick in forcing Drew to back off on his marriage plans.  Drew had always believed that Serena and Brandon’s friendship deserved more than his polite apology, her gracious acceptance and then a decade’s worth of silence. What she wasn’t so certain about was if she and Brandon could survive the time until then.  They were either going to kill each other or kiss each other—and she had no doubt which she preferred.

Brandon Chance might be a bodyguard, but her body had never felt more exposed.  His eyes, dark but glinting with flecks of gray, danced with what she could best describe as delight.  This was dangerous and Brandon loved risk. In every way, he was telling her to proceed with caution.

Proceeding with caution, however, was not in her skill set.  If it was, she wouldn’t have cooked up this plan to begin with.

“Since when have I needed anyone’s permission to do anything?”

His mouth quirked with a half-grin.  “Fair point.  Still, I’d think that even a free-spirited, open-minded woman like you would extend the guy the common courtesy of knowing that another man had invaded his turf.”

Serena matched his smile, then turned and continued putting their meal together as if he hadn’t laid a mine field of verbal IEDs meant to derail her calm and confidence.  “You really think I’m going to rise to such obvious bait?”

He pressed again into her space, stationing his pelvis millimeters from her backside. Even with no body parts touching, she felt every inch of him as he closed in, warm and large and undeniable.

“I never could resist trying to push your buttons,” he confessed.

“Buttons?” she asked, tossing a challenging glance over her shoulder.  “Is that what we’re calling them now?”

Her question sliced through the air like the dart she’d thrown in his office and it hit dead-center with the same precision.  He flinched.  What remained of the space between them constricted, becoming an elastic force. Taut yet pliant. Supple and subtle and sizzling with an undercurrent of volatile energy.

“You’re hiding something,” he whispered, his fingers hovering near the small of her back. His words floated on a breath of air that singed the curls at her nape. “We may not have seen each other in a long time, but you’ve always been an open book to me.”

He slid his hand upward, not touching her exactly, but disrupting the gap between his hand and her skin.  Once he reached the curve between her shoulders and neck, he twined his fingers into a few tendrils of her hair.

“What aren’t you telling me?” he asked.

Serena reached into the cupboard, trying to keep to her task, desperate to break the spell he was weaving.  Her hands shook as she placed the glasses on the countertop. Handling breakables right now was not a smart move—but then again, neither was inviting Brandon back into her life.  He exuded sexual energy with the same unstoppable force as the Mississippi River during a flood.

She’d fended off that attraction once, but only because he was drunk and sloppy and stupid. What could possibly save her now?