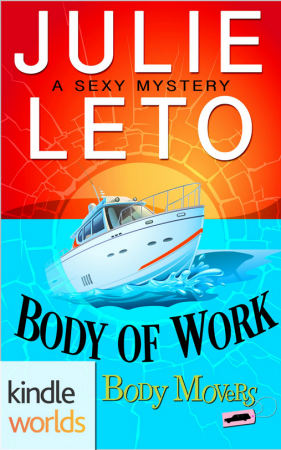 BODY OF WORK is a part of the sanctioned “fan fiction” program called Kindle Worlds. This short book (approximately 112 pages) is a “what if” based on the situations and characters in Stephanie Bond‘s sexy mystery “Body Movers” series. The story is mine, but the characters are on loan from the Body Movers world, with permission from the author.

After being accused of a murder he didn’t commit, former Medical Examiner Cooper Craft has become used to suspicion and mistrust. So when the woman Coop is visiting in Key West goes missing, he knows he’s in trouble.

Unfortunately, the only person willing to help him is the woman people believed he’d killed.

But Maria Marquez is very much alive…and very much in hiding. Feeling responsible for what happened to Coop, she wants his forgiveness. But she never imagined that trying to put her past to rest would launch a future she never dreamed possible…

“I hacked your email.”

Coop didn’t know what he’d expected to hear, but he supposed of all the possibilities, this was the simplest and most believable explanation for how a woman he’d believed was dead—a woman whose death he’d been arrested for—had figured out where he was.

The inside of his mouth felt as if someone had spackled it with paste and then stuffed it with cotton balls. His head was pounding, and his vision was blurry, but that didn’t change the fact that Maria Marquez, former detective and Atlanta Police Department profiler, was standing across from him in Amber’s kitchen rather than reposing six feet under at a cemetery in Georgia.

“If you were drugged, and I suspect you were, only your short-term memory should be affected,” Maria said.

He snorted. “I was joking. Employing a dash of levity into a wholly unfunny situation. Amber used to be mixed up with some very dangerous people. I knew there was something wrong—some reason she was so desperate to get the project in Haiti going. She wouldn’t up and leave.”

Maria snagged her bottom lip with her teeth, worrying the flesh in a way he found…interesting. In Atlanta, their paths had not crossed often. When they had, they were either at crime scenes or in police interrogations. Neither situation had given him much time to notice how drop-dead gorgeous she was.

Hell, he shouldn’t be noticing now. But he was.

“Maybe you should call the police,” she suggested.

He barked out a laugh at the absurdity. “That’s rich. Thanks to you, they’ll check my ID, see my record and arrest me on the spot. They won’t even bother to look for Amber. They’ll just build a case against me while they wait for her body to show up.”

With the now-empty water bottle, he gestured toward the fridge. He needed more hydration but wasn’t feeling steady enough yet to stand. With a tiny nod, she complied, taking two more bottles from the drawer.

The fact that the top gave him some resistance as he twisted it off gave him a measure of relief. The individual bottles Amber kept in the house for when she went biking or running hadn’t been tampered with. The filtered dispenser she kept for the house? It would be all too easy to unscrew the top and drop something inside.

“Thanks to you,” he pointed out. “I may have been cleared as the Charmed Killer, but my ruined reputation could get me locked up for forty-eight hours. How lucky is it, then, that the great detective Maria Marquez has risen from the dead in time to help me?”

Maria’s almond-shaped, erotically dark eyes widened, but she didn’t object. Despite her previous attempt to railroad him into fitting her profile of the Charmed Killer, he knew she was a good cop. He couldn’t deny that the evidence had pointed to him. That had been the real murderer’s intention.

“I’ll do whatever it takes.”

“Then keep the safe water coming,” he said. “I saw another case in Amber’s pantry. Pop a couple in the freezer. While I’m flushing whatever crap someone dosed me with out of my system, you can explain how you hacked my email.”

Again, Maria did as he asked. As she spoke, she explored the so-called crime scene, though Coop didn’t think she’d find anything of use. Though Amber had never been a drinker, her past was more darkly dangerous than his had ever been. When he’d first arrived on her doorstep yesterday, the hug she’d given him had been brimming with a lot more than just excitement to see him.

She’d been scared. He’d asked her about it, but she’d insisted she was just thrilled to see an old friend again—one who’d known her before she’d ruined her bright future by becoming mixed up with the mob.

Maria swung a chair out in front of him. “Hacking your email wasn’t hard. I was motivated and you were predictable. From the report I put together while on your case, I knew you collected silver charms for the miniatures you make. A couple of searches of hobbyist forums online and I found a request you’d made for additional supplies. You listed your email address. I figured out your password and bam, I was in.”

“From detective who chases stalkers to a stalker yourself. Quite a transformation.”

“I couldn’t exactly call you on the phone and ask you when you might be leaving Atlanta so we could talk.”

“Because you were pretending to be dead.”

“I was dead,” Maria insisted.