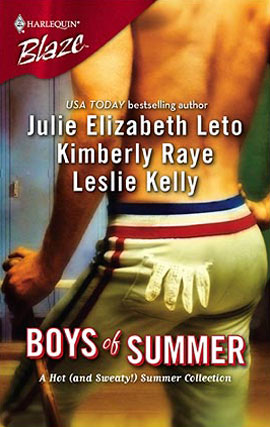 Baseball. The crack of the bat, the roar of the crowd… and the view of mouthwatering men in tight uniforms! A sport in which the men are men…and the women like them that way. Join three of Harlequin Blaze’s bestselling authors in celebrating the men who indulge in this All-American pastime — and the women who help them indulge in other things…

In Fever Pitch, Julie Elizabeth Leto introduces Callie Andrews, a woman who’s dying to have one last chance at bat… with her ex-husband! In Kimberly Raye’s The Sweet Spot, Babe Bannister discovers that striking out with a sexy shortstop isn’t so bad — especially when it leads to hitting a home run with a delicious coach…. And in Leslie Kelly’s Sliding Home, we meet plain Janie Nolan. She’s been sitting on the bench so long, she doesn’t even realize she’s still in the game. That is, until a sexy pitcher tempts her to come up to the plate and take a swing…

Louisville Slammers team owner Donovan Ross knows when to take a pitch and when to swing away, but he’s beaned by the fact that he might lose his team in a secret deal gone bad—and worse, lose his ex-wife, sensual Callie Andrews, as well. Now, if he’s reading the signals right, Donovan can score a homerun with Callie—and maybe even win back her heart.

Callie scurried into her bedroom, shut the door as quietly as she could, then leaned against the cool wood and tried to make sense of what she was doing. She closed her eyes tightly, but when she opened them, she caught sight of her reflection in the full-length mirror across the room. Even in the dim glow from the skylight, she recognized the emotions vibrating off her body. Fear. Arousal. Determination. Lust. She wanted him. She had for a long time—longer than she’d ever admit to anyone. Now, she had a chance to once again experience that fabulous, bone-melting sexual pleasure that only Donovan could give her.

And with him leaving soon, she needed closure. The season officially started in a few weeks, but she was sure with the cloud of eminent migration hanging over Louisville, the season had come to an unofficial close sometime following Donovan’s announcement. No longer the favorite son, she couldn’t even entertain the idea that he’d return for holidays and in the off-season to tend to his other business ventures. His business would no longer be welcome in Kentucky. Once he left, he’d be gone for good.

The time to act was now.

She stripped out of the rest of her clothes, dashed into the bathroom and gave herself a quick wash with a wet cloth, followed by sweet, lavender-scented lotion. She loosened her hair, freshened her make-up, then changed into a negligee she found buried at the bottom of her pajama drawer. It was wrinkled, but it fit. Nicely. Black satin. Peek-a-boo bodice.

Yes, this would do.

On her way out, she dashed back into the bathroom and found the carton of condoms she’d had there for entirely too long. Callie had had a few lovers over the years—very few, but she’d always played things safe. Even tonight, she wasn’t willing to raise all the bars. Some were non-negotiable.

In the kitchen, she found a bottle of wine, two glasses and a corkscrew. Too predictable? She put them away, then opted for two shot glasses, lime and a shaker of salt. The tequila was in the other room. Yes, definitely naughtier.

She found Donovan standing at the window, nude in the moonlight. He had his fingers through the slats in the blinds, so if anyone looked up, they’d see nothing more than his eyes.

Gingerly, she approached from behind, placing her bounty on the bar ride beside him. “See something interesting?”

“The stadium lights are on.”

Perplexed, Callie slipped into the space beside him and parted the blinds herself. She had no idea the lights from the ball field could be seen from her condo. “I’ll be damned,” she muttered.

“For associating with me?” he quipped.

She glanced up at him, a smile teasing the corners of her mouth. There were few naked men she would feel comfortable trading barbs with. In fact, there was only one.

“If that’s the case, my fate was sealed a long time ago.”

“You could always ask for forgiveness,” he offered, turning so that his muscled torso and hard thighs were inches away from her.

“You have to really want forgiveness for that to work, and I don’t regret one minute of what we had together. Do you?”

“Only the minutes we missed because I was too busy working or you were too angry to stick around.”

“I was never angry.”

He arched a brow even as his hands snaked out and encircled her waist. “Don’t start lying now.”

She grabbed his face and pulled him down, then kissed him with every ounce of longing she had for the freedom she sought. The freedom to do what she wanted tonight, feel what she needed to feel, without a moment of fear, without an instant of regret. She knew this man. She trusted this man. She understood that in the morning, there was no chance they could stay together beyond a bite of breakfast and a cup or two of coffee. Their paths would soon take them on entirely different roads.

But in the meantime, she intended to enjoy this one last pit stop.

Donovan smoothed his hands over the silk of her negligee, groaning as his fingers pressed hard over the cool material. He slipped under the lacy hem that tickled the curve of her bottom, and possessively cupped her. Donovan always was an ass man and the thrill of remembering how she used to flash him surreptitiously to get him hot and bothered made her sex pound with excitement.

“I remember this,” he murmured.

“Me, too,” she whispered, her lips brushing against his chest.

He toyed with the thin, spaghetti straps on her shoulders. With one yank, they popped away, released from the teeny snaps holding them in place.

“I’ve had this for years,” she said, amazed at how the boning in the bodice held the top in place.

“I bought it for you,” he said with a growl.

Good God, he had. She’d kept it all this time?

“I can’t believe you didn’t toss it.”

“I haven’t worn it since you bought it for me.”

“I don’t believe you wore it for very long then, either.”

She pushed away from him softly, turning as she slipped over to the bar. “Then maybe this time, I’ll stretch it out.”

He licked his lips. “Most definitely. Is that what you dream about with me? Punishing me?”

She dipped into her private stock and pulled out a bottle of her best tequila. Callie wasn’t a big drinker anymore, though she’d imbibed her share in her wayward youth. But her suppliers loved to stock her liquor cabinet every Christmas. Tonight, she figured a little liquid courage could go a long way.

“Not exactly,” she replied cryptically.

“Then what, exactly?” he asked.

She twisted open the tequila, then grabbed a knife from the drawer. “Sit over on the couch and I’ll show you.”