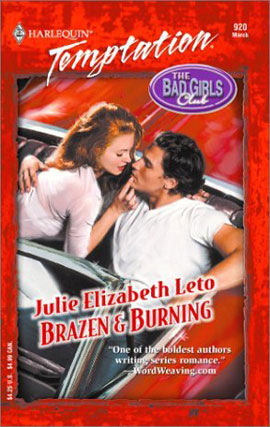 Sydney Colburn is a card-carrying member of the Bad Girls Club. When she wants something, she goes after it until its hers. Too bad it took her over a year to realize that she wanted sexy architect Adam Brody for more than a love-’em’-and-leave-’em affair. So with a little help from her friends, Sydney finds Adam and sets out to seduce him back into her life. Unfortunately, Adam doesn’t remember who she is…

Adam Brody instantly reacts to sultry, sensual Sydney. He doesn’t remember their affair, but he’s completely open to Sydney’s offer to remind him—touch by touch and kiss by kiss—particularly since Sydney holds the key to sorting out the mystery of the accident that stole his memory in the first place. Besides, there’s no man alive who can say no to a bad girl…

She pulled her car keys out of her pocket, detached her condo keys, then tossed him the ring that would start the Corvette. “My pleasure, but I’ll need to run upstairs first. Warm up the engine. I won’t be two minutes.”

She didn’t lie. Sydney flew upstairs and then back down in less than one hundred and twenty seconds. She had her purse in one hand and a small cooler in the other.

“Let’s blow this joint,” she instructed, green eyes flashing. She tore her hair out of the ponytail and let the wind from their race out of the garage sweep her curls into a windswept mass of sexiness.

She gave him directions and in less than ten minutes, they’d apparently arrived. When they approached the back entrance to what appeared to be a country club, she leaned over and flipped off the headlights, then extracted a key card from her purse.

“I take it you’re not a member,” Adam asked, trying to concentrate on something besides the way she wiggled her backside as she climbed across his lap in her reach for the automatic gate.

“I don’t know any debutantes.”

She slipped the card into the machine and after a red light turned green, a buzz alerted him that the gate had slid open.

He hesitated before easing the Corvette through.

“Then you’ve been here with him?”

Sydney grinned. The fact that he’d exhibited even the least bit of jealousy seemed to please her, but he wished he could restate the question.

“Not the way I’d been here with you.”

He scowled, so after laughing and insisting he go through the gate before it slid closed, she explained further. “The head groundskeeper is a closet gay. But we work out together at the gym and when he needs a date, he calls me. In return, he gave me a copy of his key card and showed me this entrance.”

“So I could seduce you outdoors.”

“You needed a private country club for that?”

She settled back into her seat, her eyes and smile dancing with that blatant naughtiness she wore so well.

After spying her check her watch, Adam followed her directions down a thin path, past a small outbuilding and into a clump of trees. In the distance, a large colonial mansion at least three stories tall, lit by countless lights, loomed on a small, man-made hill. He saw no one milling about the expansive verandah or ornamental garden, but guessed the humid air kept the club members inside where the air-conditioning could protect their hundred-dollar hair-dos and even pricier clothes.

Sleek greens and brushed sand traps dotted the pristine landscape. Palm trees lingered on the edges, mixed in with native pines and palmetto. Adam had never been an avid golfer, but he’d learned the game from his one-time mentor, Marcus Malcolm, so he could work the links for business. With a high handicap and little patience for the slow-moving sport, Adam finally convinced Marcus to leave the golf-related smoozing to his lower handicapped son, Steven, the heir to the Malcolm design firm. With or without his amnesia, Adam couldn’t remember the last time he’d been on a green, and he was certain he’d never sneaked onto a green late at night, except maybe once when he was a kid, filching lost balls to sell back to golfers for bubblegum money.

The minute Sydney pointed to where she wanted him to park, a forbidden thrill hit him full force. Sliding the car between two small hills, hidden from behind by a clump of bushes, no one could possibly see them.

In the dark, but out in the open.

When he pulled the emergency brake, she jumped out of the car. She’d already discarded her shoes and wore nothing but the midriff-baring tank top and her jeans, which she’d refastened before they’d gone to see the neighbors, but had now again released. Tiny brass button, now folded down just under her navel, caught a flash of moonlight and winked.

He didn’t need any more invitation than that.

He chased her out onto the lawn, catching her as she spun, bringing her down to the ground with a soft thud, his arms cradling her fall. Laughter peeled against the quiet of the night—his deep, hers light. An invigorating rush coursed through him, compelling him to capture her mouth with his and kiss her long and hard.

Her scent, a romantic mixture that reminded him of sunrise—crisp and cool, softened by the colors of lavender and rose—blended with the fresh scent of the grass into an intoxicating combination. He inhaled as he nibbled her neck, fired by the sound of her laughter, invigorated by the way she moved her body so his sex pressed into the juncture between her thighs.

“God, I want you, Sydney,” he admitted, not knowing when he’d wanted someone more than he did at this moment.

He kissed her thoroughly, his tongue and lips learning her mouth, his hands blazing a trail down her sides, across her back. She was bold and brazen, stopping only once to wiggle out of her white-washed jeans so that she wore only her tank top and purple t-back panties. The tiny straps criss-crossed her hips and thighs, fairly begging for removal with his teeth.

He moved forward, until a thought struck him. Had he done that to her before? Had he taken off her underwear that way, or had the scenario popped into his mind only because it was perfect for the moment?

“We’ve made love out here before, right?”

She scrambled onto her knees, her eyes filled with contained expectation. “Do you remember?”

“I’m not sure. I have a very strong image of me removing your panties with my teeth, but I don’t know if it was a memory or a prediction.”

She rolled her eyes, then playfully let herself fall to the side, her arms reaching out to him. “Well, damn, Adam, I can’t remember all the little details! You’re going to have to recall something a tad more significant.”

He crawled over to her, like a jaguar on the prowl. “Then I’m going to have to do something more significant.”