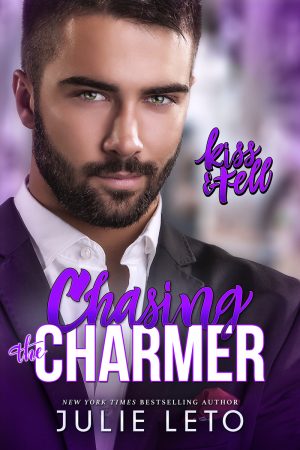 He was wickedly delicious…

CEO Dominick LaRocca is a wanted man. Thanks to a sexy marketing ploy for his family’s infamous pasta sauce, Nick has groupies and stalkers and obsessive fans galore. Unfortunately, the only woman he wants is the one hired to protect him, novice bodyguard Samantha Deveraux. But how can Sam guard Nick’s body when she can’t keep her hands to herself? She’s been burned by rich, powerful men before. Can she satisfy her raging hunger without risking his life and her future?

This is a brand-new, updated super-sexy contemporary romance! Although originally released in 2001 as a Temptation titled “Insatiable,” this new version is longer, with new characters and a romance for Drew Stuart, Serena’s best friend in BETTING ON THE BODYGUARD.

“But this is just a temporary job. Until my boss gets back from his honeymoon.” She paused, biting her bottom lip before admitting, “I’m a protection specialist with No Chances Protection.”

Her claim grew louder as she spoke, as if she was trying the label on for size.

“A bodyguard.  Does that shock you?”

“Shock?” he asked automatically.  After his brush with the screaming crowd, Nick couldn’t begrudge her choice of occupation.  He was having a damn hard time begrudging anything at the moment. Just walking behind her, watching the alluring swing of her hips, catching the light in those impressive blue eyes whenever she looked over her shoulder, did amazing things to his outlook. He’d been in a state of perpetual grumpiness for weeks now.  His cousin and assistant, Anita, had started calling him “the ogre” at least ten times a day. Right now, following behind sassy Ms. Deveraux as she guided him through the tunnels beneath the Superdome, felt like the questing prince who slew the ogre…all for the sake of a sexy blond princess.

No, that wasn’t right.  He felt like the damned princess.

“I suppose some clients would prefer to have a female bodyguard,” he posited, not wanting the conversation to devolve into an argument about equal rights.  He’d had enough of those with Anita to know he couldn’t win.

“But you wouldn’t?  Despite the fact that I just saved you?”

She increased her pace so that he practically had to jog to keep up with her.  She might have been petite, but she hadn’t been exaggerating when she said she was quick.

Everything about Ms. Deveraux went against his grain. She was tough. She spoke her mind. She took control and did what had to be done without waiting for his consent or approval.  This might be a fine combination for some men, but not Nick.  And yet, she stirred his blood like a chef with a swift wooden spoon.

Nick knew his preferences for a lover—sweet, submissive, maybe a little shy—were about a century behind the times.  He’d struggled with this until he came to the conclusion that meek women deserved love, too.  And yet, when he’d had a ready, willing specimen in his life, she’d bored him.  Up until the minute that she’d told the world that Nick had insatiable appetites that no decent woman could meet.

And though he was the last heterosexual man on earth who wanted to get married, he couldn’t deny that very, very soon, he’d have little to no choice.

His grandmothers had always said that they wouldn’t retire or turn the company completely over to him until he settled down and started a family.  He’d come close to making their wish come true with Sofia, but their engagement had been short.  The minute he’d put a ring on her finger, she’d become less tolerant of his late nights at the office, Saturday strategy meetings and extended trips to Europe that didn’t include shopping sprees or tours of cathedrals and museums. Since then, he’d dug in his heels against marriage.  At first, they’d resorted to trying to fix him up, inviting a string of “nice girls” to family events he was obligated to attend like weddings, baptisms, birthdays.  More than once, they’d shared the route and time of his Lake Shore jogs so that he’d invariably meet up with a “friend of a friend” while he’d stopped for water or for a stretch.

He hadn’t succumbed, so in true Italian style, they’d upped the ante by declaring that if Rose and Fae died before he married, LaRocca Foods would be sold, in pieces, to various family members. The conglomerate he’d worked so hard to build would cease to exist. All the market power he’d amassed since he joined the company just out of college would be lost.

Why they’d risk so much had perplexed him until he realized their dictate wasn’t about control or values—it was about legacy.  Until he took over the business, the LaRoccas and the Durantes had struggled through two generations of barely making ends meet.  Children didn’t go to college unless they won scholarships.  Families doubled up in houses to make sure every mouth was fed.

And when the family’s restaurant fell on hard times, things got worse.  His grandmothers had come up with the idea to supplement the family income by selling their pasta sauce from behind the register, but it had been Nick’s idea to build a display case for the West Monroe Street entrance. He’d been the one to sign them up for food festivals, to build their social media presence and send a couple of food trucks to the most popular spots in the city.

After completing his course of study at the University of Illinois, he’d personally pounded the pavement to introduce their products to grocery stores. And just seven years ago, he’d spearheaded the promotion campaign that pushed their private stock into the public marketplace for a premium price.

And all without putting his own picture on a single label.

Was he going to lose all he’d built because his grandmothers had one-upped him in a public way?

Nick quickened his step to match Ms. Deveraux.  They were nearly at the exit, judging by the signage, though he still couldn’t see where he’d go out.

She shook her head, a few more strands of blond spilling out to brush her shoulders. “That’s not the way we do things in Louisiana,” she said proudly, adding a Creole lilt to her accent-free voice. “This is a Southern state, remember? Hospitality and all that.”

“Yes, well, I’m from Chicago. We do things just fine on our own. The last thing I need is another woman clamoring to hold my hand.”

She stopped her progression down the hall and impaled him with a look of utter disbelief. “I’ve met lots of people from Chicago and not one was rude. I hate to point out the obvious—well, actually, no I don’t—but I saved your ass back there. And I didn’t once try to touch your hands.”

He didn’t want to think about what she had touched. And how that touching had sent his pulse rate skyrocketing.

“You have my gratitude.” He reached for his wallet, but the widening of her azure eyes to the size of jar lids stopped him from offering money for her service. He pocketed his eel-skin billfold. “Do I just keep going this way or…?”

The sassy security guard with the name Deveraux stitched above her left breast—a rather pert, curvaceous breast—slid her cap off her head, releasing the full, bouncy tumble of her hair. She eyed him head to toe, a growing distaste skewing her bowed lips.

But when she met his gaze, her smile brimmed with sugar.

“Yes.  Keep going down this hall.  There’s a blue door that will lead you precisely where you need to go.”

He nodded to her curtly—just to make sure she didn’t follow him—and proceeded in the direction she’d indicated. Insulting women wasn’t usually his modus operandi, but he’d been forced to change course when Nana Rose and Nana Fae had schemed to make him the most eligible bachelor on the Fortune 500. He had no right to take his frustration out on Ms. Deveraux, but she had the unfortunate luck to be the nearest person within range. He’d dictate a letter of commendation to her superiors as soon as he found Anita.

He turned the corner and found the blue door, next to one painted gold.  Clutching the latch, he hesitated, turning his thoughts from the woman behind him to plotting how he could reschedule his appearance at the booth. He’d been scheduled to glad-hand some of the industry’s largest chains, hoping to charm his way into more shelf space and additional end-cap promotions in an increasingly tight market. He’d be damned if he’d abandon his short-term goals for the Expo just because his grandmothers intended to make him the—what did she call him?—Justin Beiber of the grocery business.

He opened the door and was a half-step across the threshold when a distinctly feminine squeal snapped up his head.

Nick glanced over his shoulder at the slowly closing door.

Yet he was not standing in a parking lot.  He was in the Expo registration area, where lines of people queued up for security checks.  And one by one, recognition dawned on the faces of several women standing just a few feet away.

One held a full-sized cut-out of herself.

From behind, Samantha watched LaRocca’s fists clench. His shoulders tightened. She could only imagine the look on his face—and the horror she pictured gave an extra curve to the smile. Some men had to learn the hard way. Samantha Deveraux was not a woman to be dismissed. Someone might do it once, but twice?

Disheveled and distraught, the women who’d previously gone wild at the site of their prey were being escorted out of the Superdome.  Struggling against the grasps of several annoyed security guards, they’d yet to release the pent-up energy the Pasta Man had invoked. As Sam had guessed, her co-workers had reached the main lobby, which seemed to be crowded with more fans of the pasta man who hadn’t come with tickets to the event.

She’d mislead the lion right back into the den.

She considered letting the blue door slam shut behind him, but her duty to protect him intruded on her fun. Pushing the door open at the last possible minute, she grabbed him by the hand—on purpose—and dragged him out of harm’s way.

“Did I say blue?” she asked once the door slammed shut, sugar dripping from each syllable. “I meant gold. The gold door is the parking lot.  Blue leads back to the lobby.”

A storm swirled in his eyes, reminding her of a deadly waterspout in the gulf. “That was uncalled for,” he snapped, once again trying to straighten his tie and jacket despite that he looked as if he’d just…well, as if he’d just escaped a screaming crowd of crazed women clamoring for his bod.

“I beg to differ.” Samantha planted her fists on her hips. “I’d say it was completely called for. I won’t be treated like a groupie. My job—in addition to saving your butt—is to escort you to safety. If you won’t let me do that job, then I can’t be responsible for the consequences.”