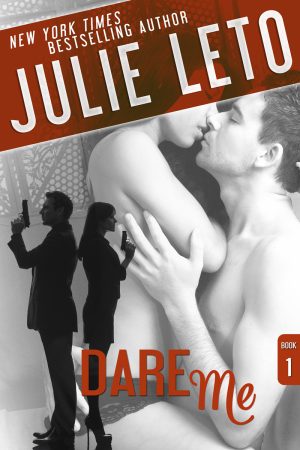 When faced with a choice between saving the world and reclaiming your one true love…why not take both?

Secret agent Macy Rush is on a mission: find the counter-code that will thwart an impending terrorist attack. But her operation goes from bad to worse when she discovers the New Orleans mansion she must search is now owned by rival spy Dante Burke—the man who betrayed her in the most intimate and destructive way.

As lead agent for The Arm, an elite, black-ops division of the CIA, Dante has already searched the house from top to bottom. Though he’s come up empty, Macy insists on checking for herself. Dante agrees—for a price. During the day, he’ll help her try to save the world. But at night, she will be his.

Note to readers: This story was originally published by Signet/NAL in 2005 in a collection with Cherry Adair and Jill Shalvis. My story was then called “Dare to Desire.” I never really liked that title, so I decided to take the collection title as my own, since I’d suggested it originally. I made significant changes to this version, particularly since a few reviewers didn’t understand how Dante could put so much time and effort into seducing Macy when he should have been trying to save the world. In this version, I clarify that Dante doesn’t believe the secret to saving the world is in this house…he believes if there is a way to save the world, it’s not in New Orleans. But Macy is and he wants her back. He has other teams trying to save the world elsewhere! But then, of course, he’s proven very, very wrong! I also tightened up the writing so it jibes with the way I write now…I hope you give it a chance and enjoy the ride!

If he had any sense at all, he would have worn his Kevlar this morning. As the luridness of his offer slowly seeped into Macy’s brain, the jab of the gun against his gut increased. If she was any other woman and he’d made the same sexual offer, he wouldn’t have entertained even an inkling of fear that he’d be turned down, much less that he’d be shot for his audacity. But he wasn’t dealing with any other woman. Macy Rush not only had motive and now, opportunity, to kill him, she had enough justification to warrant an immediate acquittal from any court in the land.

“Offer denied,” she said, her words seething through her teeth. “Try again.”

He shifted his position, but Macy simply shoved the gun further into his stomach. He’d ordered his men to leave him and Macy alone and knew they wouldn’t disobey until shots were fired. Too late for him at that point, but at least the house wouldn’t fall into the hands of T45. Not that he was worried. Odds remained that the terrorists who’d made the threat would not have the manpower to bring their plan to fruition. Still, Dante had learned long ago that most international anarchists did not reveal their intentions to their enemies unless they were confident of their ultimate success.

And yet, time was on his side. With Macy looking for the code, he figured he’d have the crucial combination in a matter of days. He could afford to hitch the mission on his own personal agenda. He couldn’t change the past, but the future was ripe for the taking.

Boldly, he pressed closer so that her breasts crushed against his chest. The old fire they’d once shared instantly sparked. He could see the attraction in her crystal blue eyes. He could feel the lust in the stiffening of his sex.

“My offer stands, Macy. I want you back. Truth be told, I never wanted you to leave.”

“Then you shouldn’t have betrayed me.”

“I can explain that.”

He didn’t bother to try, though. Even before her eyes narrowed with keen disbelief, he knew Macy wasn’t ready to listen. Any explanation he offered now would fall on ears deafened by anger and righteous indignation—reactions he’d expected, anticipated, even planned for. If he had to choose from the full range of Macy’s fiery emotions, anger wouldn’t have been his first choice to deal with—but it sure as hell beat indifference.

“You’ve had ten years to create an elaborate explanation for your actions, Dante. I can only imagine what spin you’ve come up with. But I don’t want to hear excuses. Not now. Not ever. I’m only interested in finding the code.”

He leaned slightly forward, so that his breath teased her wispy red bangs. “I’m offering you the chance to find the code with virtually no interference from the Arm. All you have to do is let me make love to you.”

Without warning, Macy pocketed her gun and stepped away. She shrugged her jacket closed, but not before he noticed the tell-tale peak of her nipples through her smoky blue silk blouse. The sight evoked a surge through his blood that heightened his confidence and libido. Yes, he wanted her. That much he’d known. But she wanted him, too—whether she liked it or not.

Chemistry was a powerful thing.

“You’re becoming sloppy in your old age, Dante, allowing personal desires to interfere with a mission.”

Dante shrugged nonchalantly, but his eyes remained trained on Macy as she stalked around the room. She’d already begun her search.

He crossed his arms, bracing himself against the powerful affect she had over him. Yes, he wanted her, but he wasn’t about to tip his hand, not when the prize was so worth the danger of the game. “I’m merely attempting to accomplish two crucial goals at one time. In fact, the economy of my plan is quite impressive. It’s win-win.”

Macy speared him with a spiteful glare. “This is the best you can do to seduce me? Hinge the success of my mission on my having sex with you?”

He grinned. “Brilliant, isn’t it? Flowers and poetry don’t move you, my love. They never have. But dangle the carrot of another successful mission in front of you and you can’t resist.”

Macy pressed her lips tightly together and from inside the pockets of her jacket, he could see her fists straining against the leather. Like him, Macy was a professional liar. She could fool the best that the world’s intelligence agencies offered. But so could he. Even from the beginning, they’d learned that lying to each other was a complete waste of time. He’d managed to feed her a mistruth only once since he’d known her and that decision had cost him her love.

Love he was determined to get back.

“Macy, you must admit,” he continued. “I’ve taken good care of myself over the years. I’m not unattractive. I can’t imagine you’d consider sleeping with me such a huge sacrifice.”

She arched a dark red brow. “Are you so hard up?”

He didn’t bother glancing at his crotch to drive his point home.