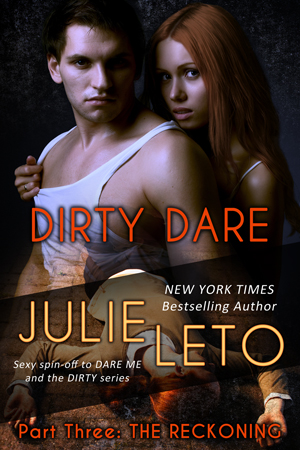 The final installment in the Dirty Dare serialized novel…AVAILABLE FOR A LIMITED TIME!

The last part of a three-part experiment in storytelling, THE RECKONING, is available only for a few more weeks. After that, DIRTY DARE will be available only as a complete novel. To read more about it, go here.

When he heard Brynn’s hand touch the doorknob, Sean shut his eyes and prepared for the storm.

Not a storm of anger. They had moved beyond that emotion on the plane. No matter what the future held, he wouldn’t go back there.

It was weak. Indulgent. Pointless.

Brynn deserved better. Hell, so did he.

In the still quiet, he couldn’t block out the inalienable truth—together, he and Brynn were an unstoppable force. Nothing would keep them from finding his child—nothing except the jumble of emotions that had turned his steady hands and even-keeled focus into a liability. When the going got tough, he reverted to his training. Sean was, first and foremost, a soldier. He was used to taking orders. He found comfort in turning off his brain and acting in accordance with protocols and strategies that had proven their efficiency.

But those skills wouldn’t serve him with Brynn. She was adept at giving orders, but what would that make him if he followed?

She was a conduit to his strength, but she was also the foundation of his vulnerability. Even before he’d learned about his daughter, Brynn had compromised him six ways from Sunday, starting from the moment she’d rescued him from that damned metal chair.

Like a wraith, she’d slid inside the confines of his heart with the same stealth as she used now to enter the darkened bedroom. She shut the door behind her with a nearly imperceptible click. The air, circulated by a creaking ceiling fan, collected the warmth flowing between them like a cloud sucking up humidity.

When she was within range, his body thrummed and purred like a finely tuned engine. When she touched him, his heartbeat would rev to a speed well beyond any safe limit.
Sooner or later, he and Brynn were going to careen out of control.

It would be her doing—but it wouldn’t be her fault. He’d raced into a relationship with her when everything he knew, from hard life lessons to covert training, had warned him to proceed with caution.

Now, the damage was done. He’d always need her. Always crave her. That was the price a man paid for falling in love.

Maybe someday, he’d be able to lose himself in love, but while they were in danger, he couldn’t risk it. Not when both of them had so much to lose.

The shade was drawn. Moonlight barely broke through the razor-thin gap along the edge of the window. Over his shoulder, he watched the shadowy outline of her hand hover just above his bare arm.

“I don’t think we were followed.”

“Neither does he,” she replied. “But he needs to do something. Get out of the house.”

“Is he still pissed?”

“He’s not used to feeling protective of me. He just needs time to sort it out. He’s making a sweep of the property, and then he’ll take up a position in the apartment above the garage. It has a clear vantage point of the street.”

He heard an unexpected smile in Brynn’s voice.

“She’s camping out on the couch in the front room, but she made a point of letting me know that she’s a very deep sleeper.”

Brynn still hadn’t touched him, but the warmth from her palm sketched his skin, tickling his flesh with a promise of heat.

“Especially after you finished up that bad Scotch,” he teased.

“You heard that? I would have offered you some, but—”

Her concern sliced through him. “I’m not made of glass, cher.”

“You’re not made of stone, either.”

She moved closer. Her clothes brushed against his bare flesh, igniting a heat, an awareness that he hadn’t wanted to feel.

Sean was a strong man, but even he didn’t have the wherewithal to resist her. She was his kryptonite. His Achilles’ heel. She was also his radioactive spider bite. When she finally slid her hand over his shoulder, his insides quaked, not from weakness but from a reinvigoration of his power.

“Your brother,” he started, but she cut his weak argument off by pressing her lips to his bicep.

“Don’t waste your time. Ian’s not here, and Lia will be dead to the world before I’m undressed. Besides, I got the distinct impression that she thought that you and me together would be a good thing. She has no idea how good, though, does she?”

Mustering the full breadth of his strength, he shifted out of her reach.

She slid her arms around his waist and tugged him back. “When, then? After you have your daughter back? She’ll need you more than I do, and I won’t have the heart to fight her for you. Until then, you’re mine. Every moment we’ve had together has been stolen, Sean. Stolen and precious.”

He couldn’t argue. Wouldn’t. Why would he? He wanted her, and she was right—their time was borrowed. He turned, took her in his arms and kissed her as if tomorrow would bring the end to everything they’d shared. Chances were good that it would.