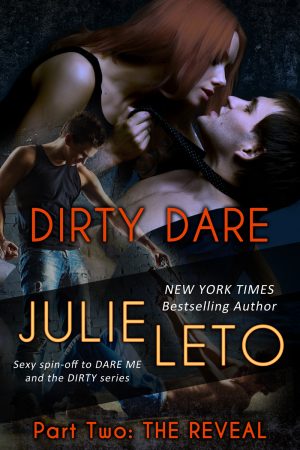 Sometimes, the truth is deadlier than the secret…

Ex-spy Sean Devlin has survived torture and betrayal, but when he goes off the grid with security specialist, Brynn Blake, his lone wolf status is tested. He’s lost one lover because of lies and double-crosses. Can he risk losing another?

Brynn never banked on falling for Sean so hard. He’s everything she’s never wanted—and everything she needs. He makes her feel safe and alive, even as the sins from his past draw her deeper into a world of danger and lies.

His secrets make him irresistible, but will the shocking truth draw them closer or rip them apart?

The stink of rotting fish guts, burnt grease and overripe produce burned the insides of Sean’s nostrils. After so many weeks of fighting pain with every breath, smelly gulps of air were just as welcome as sea breezes and perfumed skin.

Though now that he’d been hiding amid the refuse for nearly an hour, he would have paid a king’s ransom for one more whiff of Brynn.

His gaze flicked out of the shadows, away from the restaurant’s kitchen door. Ten buildings down and three stories up, Brynn was safe in their room. By now, she’d read his note and respected his carefully worded request that she trust him and stay put until he returned.

After she’d gone into the shower, his restlessness had won over his confidence that his first sweep of the area had been enough. He’d grabbed his gun and slipped away to take a second look around the hotel, determined to return before Brynn came out of the shower.

Once he’d reached the lobby, however, he’d opted for a quick trip to the restaurant where they’d ordered their meal. He wanted to see the creep who’d freaked Brynn out for himself.

One look at the guy had convinced him to stick around.

Sean may have not known Brynn for long, but he’d learned enough to trust that if the delivery guy from the restaurant had set off her spidey senses and his initial recon had turned up nothing, then he needed to take a second look. If that meant standing in sludge and breathing in toxic fumes while rats climbed across the toes of his shoes, then so be it.

They’d done it once.

They’d do it again.

And despite the risk, he still couldn’t help calculating how, if he left the dank alley in the next ten minutes, the stench from the restaurant’s garbage might not have permanently leeched onto him. When he returned, he could climb into bed where he fantasized Brynn might be, slide his hand between her legs or suckle the spot beneath her ear that seemed to be her “on” button so they could make love until morning.

He could feast on her sweet flesh as the sun rose or maybe meet the dawn with her lips wrapped around his cock.

God, those lips. That mouth. That body.

But it was only a fantasy. A delicious, diverting dream. He wasn’t going anywhere until he figured out if the man who’d spooked Brynn was a real threat.

Sean watched a pair of low-level kitchen workers drag another pile of refuse to an overflowing bin. He listened to their conversation, glad his brief interactions with Brynn’s associate, Marisela Morales, had renewed the unused pathways to his scant knowledge of Spanish.

Apparently, the chef was a bastard. This information lent nothing to Sean’s reconnaissance, but neither had the maître d’s smoke break, the waitress’s quickie with the line cook in the alley or the bartender’s trip to his car with a case of port the owner would probably never miss. So far, the only thing Sean’s surveillance had revealed was that since the storefront entrance had been locked at the end of service, the delivery guy had remained inside, helping one of the busboys clear the glasses from behind the bar by tossing back the leftovers.

As disgusting as this sounded, Sean considered it valuable intel. A guy who’d swallow down the dregs of a stranger’s drink was desperate for a buzz and probably desperate for money, too. This was a dangerous combination. If someone offered him enough cash, he’d give up information on his own mother. If he had recognized Brynn from her previous trips to this town, he was a potential problem.

Or an asset—depending on who had the bigger wad of cash to throw around. Luckily for Sean, Brynn always traveled with a generous supply of euros.

It wasn’t outside the realm of possibility that someone in San Sebastían knew who Brynn was. If she’d been a frequent client of the sought-after document forger who lived here, then so might a lot of other people in need of that type of service—precisely the same kind of people who’d be on the lookout for a wayward ex-CIA agent and the head of one of Europe’s preeminent security firms, particularly one whose founder had been a charter member of the shadow group, T-45.

Of all the things he’d learned about Brynn, that scrap of intel had caused Sean the most concern. As an organization, T-45’s reach extended to the highest echelons of international relations. No one knew the precise number of assets under T-45 control, but the CIA had estimated a scant one hundred spies and specialists who’d sworn their loyalty to profit and danger over code and country. They’d been a concentrated pain in the ass to legitimate agencies since their inception.

The fact that Jayda, Dante and Brynn were all connected through a mercenary covert ops consortium could be no coincidence.

Sean waited another half hour. One by one, the employees of the restaurant left. By the time the delivery guy finally came out, Sean had the shakes from a combination of secondhand smoke and lack of movement. Cold and in no mood to fuck around, he watched the guy stumble toward the street, slurring assurances to the waitress he’d followed out that she wouldn’t be sorry if she took him home for the night.

“Just got a buzz on,” the man argued. “Won’t stop me from performing to your liking, lass. That’s a promise.”

“One you’ve made before, and all I got for my trouble was a bad reputation. Go home.”

Sean kept to the shadows, following the pair down the block, blending into the shadows of a storefront while the waitress unlocked the door of a two-seater coupe.

She snorted. “You live around the corner. Or did your landlord lock you out again?”

Liam continued to harass his co-worker even after she rolled up her window and drove away. The guy wasn’t Sean’s idea of a criminal mastermind. He was a drunk opportunist, but Sean saw no evidence that his chance meeting with Brynn had in any way altered the course of his evening.

He was a dead end.

Sean turned, intending to slip into the nearest alley and backtrack to the hotel when another car, this one long, sleek and black, cruised onto the main thoroughfare.

The driver’s speed was no more than ten miles an hour. Ample parking existed on both sides of the street, and all the shops were long shuttered for the night, yet the sedan continued at a crawl. When Liam strolled to the corner and lit a cigarette, the car surged forward. Tires squealed when it braked by the curb.

Sean remained out of sight, cocking his head in hopes of hearing the conversation that ensued. Unfortunately, Liam had practically leaned all the way into the window.

Then Liam stood straight, jerked his arm in the direction of his and Brynn’s hotel and said, “I swear to God, she’s there.”

Sean dug into his pocket, retrieved the burner cell Brynn had packed and sent the text he’d prepped in case of emergency.