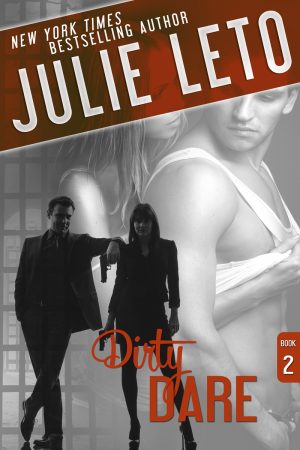 A sexy suspense spin-off to the DIRTY and DARE ME series…The Rescue, The Reveal & The Reckoning all in one book!

Captivity has never been so hot and steamy…

Former CIA operative Sean Devlin, shanghaied and forced to endure weeks of torture, has a choice to make. Give up the location of his ex-lover—who is dead—or die. Luckily for him, a guardian angel comes to his rescue. But will she save him or lead him deeper into danger?

Security specialist Brynn Blake rarely gets her hands dirty, but when she rescues a spy with a sought-after secret, she learns that he holds the key to her future. Should she trust the mystery man who sent her on this dangerous mission or Sean, who is slowly slipping into the fortified confines of her heart?

This book was originally published in 2012 as three novellas as a publishing experiment. They are now collected in the one book, titled DIRTY DARE.

Brynn tried not to look, but if she’d learned anything over the past couple of weeks, it was that she could not resist ogling Sean Devlin. It was one thing to take on a professional mien while sponging down the flesh of an unconscious man who’d successfully faced down death, but when he was stripped to the chest with sweat glistening across his scarred yet mouth-wateringly sculpted abs and pecs while pumping iron…well, a woman had her limits.

“Hey, eyes up here,” he chastised, a saucy grin teasing the corners of his lips. “If I drop this barbell, I’m going to have to start my recovery process all over again.”

Brynn smirked. That might not be a bad thing. Her orders to keep him contained in the Barcelona beach house had not changed, but in a manner of days, the broken-winged bird of prey was going to fly the coop. He hadn’t revealed his intentions, but she had plenty of proof. And the worst part was, there wasn’t much she could do to stop him.

Delay him, maybe. Stop? Not with those biceps.

She adjusted her sunglasses, cleared her throat and widened her stance. She was supposed to be spotting his workout, not staring like a love-starved teenager. But what the hell did he expect? In record time, he’d transformed himself from a man with the strength of a kitten into a hunk on the brink of escape.

Technically, Brynn wasn’t a spy. But as she’d been raised by one and her company specialized in providing security for everyone from governments to corporations to somewhat shady conglomerates and cabals, she knew more than most. Computer hacking, installing spyware, tracking down and tracing missing persons were her specialty—so she was well aware that while she was sleeping or showering, Sean Devlin had hacked into her computer.

Not that she’d made it difficult. She’d softened her security protocols and installed tracking software, anticipating that he’d target the only computer available in the villa. He’d told her nothing about why he’d been shanghaied in the first place, but his online activity at least gave her insight into what he planned to do next.

He’d searched for information about their current location. He’d explored transportation options and had combed through her emails, searching for communiqués using keywords that included CIA, Dante and Jayda.

Though she’d gleaned nothing specific from back-tracing his activity, she did know one important fact—he was days, if not hours, away from staging an escape. And with no incoming orders from Dante and no backup since she’d sent Marisela back to the States, Brynn was on her own in devising an incentive to keep him from leaving.

She glanced away again, trying to keep her mind on her mission while Sean grunted, puffed and pushed his body to limits normally reserved for a man much younger and much less damaged. Clearly, he was a man with a plan—a man willing to risk anything and everything for…what? Revenge? Retribution? Love?

Prior to his electronic invasion, she’d searched for information on “Jayda” and had found nothing. The name could refer to a place or be a codename for a classified mission, but from the determination in Sean’s face as he began a third repetition of bench presses, Brynn guessed the name belonged to a woman—a woman who meant more to him than his own life.

Maybe she was just being overly romantic, but Brynn had observed Sean for going on four weeks. He was a man of amazing discipline, but his power came from passion. When he wanted something, he worked beyond excruciating pain or insurmountable odds to get it. If Jayda was, indeed, a woman, then Sean would find her.

Possess her. Maybe even destroy her.

She sighed. She really had been alone with him for too long.

For all she knew, Jayda was the name of his pet fish. Or his sister, though she’d found no evidence of any other siblings—even Leo Devlin—in the many searches she’d done while sitting at his bedside. If Jayda was a woman, she was damned lucky. He’d stop at nothing to return to her. Maybe he’d endured the beatings and torture to protect her. Of all the possibilities she’d entertained since suffering radio silence from her friend at the CIA, that seemed the most plausible scenario. The only time she’d ever seen men push themselves to the edge like Sean was, it was for love.

She’d seen it with clients. With her parents. Even her brother had gotten caught up in an obsessive relationship that had nearly cost them the business—and Brynn her life.