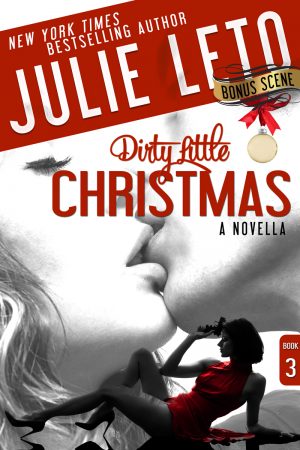 Marisela Morales has a secret…and after a year of successful assignments as a security specialist, she knows how to keep one. But when a man on a mission to claim his birthright changes Marisela’s Christmas surprise into a treacherous game of cat and mouse, she’s forced to turn to the one partner who has never let her down—sexy Frankie Vega. Can they save an unborn child caught in a deadly power-play…or will this holiday season end without a Christmas miracle?

Note from Julie: This is a brand-new, never-before-published novella in the “Dirty” Sexy Suspense series. Currently, it is available only at Amazon for the Kindle or Kindle App. If you’d like to know when the book will be released to other platforms, such as Nook or Kobo, please sign up for my newsletter or subscribe to the front page of my website. Also, please note that if you have a table or smartphone that supports Apps, you can download the Kindle App for free and read DIRTY LITTLE CHRISTMAS there. Thank you!

She’d had to rip the words out of her throat as if they were sick, pussed tonsils, but she’d said them and wouldn’t take them back. Not until she found Belinda and made sure the pendejos who took her paid with their balls—or their lives, if they’d hurt her or the baby.

“Come on, vidita. It’s almost Christmas. Can’t you wait for a booty call until after the new year?”

His chuckle warmed her heart, then shot the heat lower before her bloodstream reacted with an icy blast of cold. She didn’t have time to fuck around with him, literally or figuratively.

“Cállate la voca, Frankie. The only kind of booty I’m interested in is the kind I kick. I’m at the airport. I was picking up Belinda to surprise my parents for Christmas and—”

“—and somehow, you’re involved in the explosion on the top of the parking garage.”

“Police scanner. Shit, Marisela. What the fuck did you do?”

“I didn’t do anything except try to save my sister from being snatched by some brutes in an SUV. And I failed. She’s gone. She wasn’t here for five minutes. And Lia’s hurt. I need a ride. The cops are going to start asking questions and…”

“Go to the hospital.”

Frankie cut her off. “You want to keep the cops from getting all up in your business, then fake a fucking migraine or pass out or something. I’ll meet you at the emergency room.”

Frankie disconnected her call, which had the added effect of pissing her off. Her ex had a way of getting on her last nerve, even when he was doing something to help.

But she took his advice, understanding that while she was under medical care, the police wouldn’t grill her. Just as she slipped her phone back into her pocket, the six-foot Amazon detective in the navy suit, gold blouse and killer knock-off heels started toward her with Marisela’s Smith & Wesson dangling inside an evidence bag. Marisela figured this was as good a time as any to let her eyeballs roll back in her head and pass out.