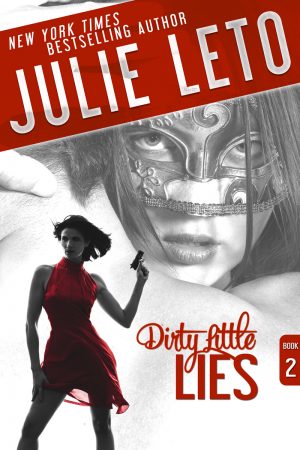 After blowing her first mission as an undercover operative, ex-gang banger Marisela Morales has a lot at stake. A recent brush with death has her partner and blazing hot lover, Frankie Vega, changing the rules of their casual relationship. Ian Blake, the boss she can’t trust, confesses a deep, dark secret, resulting in a power shift that threatens everything she’s worked for.

Then while on a security detail, she comes face to face with a deadly assassin. A teenage girl was murdered over a decade ago—and the man Marisela’s supposed to protect is a prime suspect. Once again, she has to make a choice between her job and justice. Should she stop the seasoned killer’s quest for vengeance…or join her on the hunt?

Note from Julie: This book was originally published in 2006 by Simon and Schuster under their Pocket Star imprint. After some light editing and new packaging, I’m re-releasing the book for your Kindle, Nook or other digital reading device. If readers are interested, I may write the third book in the Marisela series. Let me know by sending me an email if you would like to read more Marisela adventures!

“You have a half an hour until your shift,” Max informed her. “Finish your champagne. Mingle. Get a feel for the layout of the place. But stay out of trouble.”

She turned to blast him for his parental tone, but not surprisingly, Max had disappeared. She found some measure of comfort in the fact that she caught sight of the back of his head as he eased through the crowd.

He wasn’t a ghost, but he sure as hell acted like one sometimes.

Mingle, he said. Get a feel for the layout.

She’d rather get a feel for the dark-skinned, long-haired hombre on the other side of the dance floor, staring at her as if she were the only woman in the room.

He wore a sequined black mask, but with the slim line of a beard tracing the hard edge of his chin, he oozed machismo. His tuxedo emphasized his physique—not too muscled, but by no means slim. She arched a brow, intrigued. With a cool stride, he walked from the foyer and into the ballroom, stopping to raise his champagne toward her in invitation.

Moving in his direction, she downed the rest of her own champagne and deposited the empty flute on a passing waiter’s tray. She did look hot tonight. And she still had a good thirty minutes before Max would miraculously find her and escort her to her post. Might as well find someone…er, something…interesting to do until then.

As she moved, she enjoyed the soft friction of her silk gown against her skin. One perk of working for Titan was the wardrobe. She’d been hustled from the private airstrip where the Titan plane had landed from Mexico to an exclusive Newbury Street boutique, where she’d chosen the most expensive gown in the shop. Royal purple and spaghetti strapped, the dress curved deliciously over her body from the plunging neckline to the fitted bodice to the skirt that flared at the hips with just enough Latina swish to hide the LadySmith revolver she had strapped to her inner thigh.

But she doubted she’d need the piece tonight. Anyone who tried to rob this bunch would have to be certifiable. As she wove through the dance floor seeking out the sexy man in black, she noticed security guards posted near every exit. The Secret Service had blocked off access to large portions of the expansive grounds, and even Titan’s operatives had to check in through a special clearance procedure.

But none of that mattered to her when she caught sight of her mystery man talking to the bandleader. A few seconds later, the music segued into a Latin beat. A salsa. Not a boppy, cheerful salsa, but a sensual, sultry one. The music instantly pulsed deep in her belly. A crowd surged all around her. Even the gringos couldn’t resist such an undeniable rhythm.

She closed her eyes. Listened. Son of a bitch. He’d requested “Reina de Reinas.” Queen of queens. She moved the bangle bracelet she wore on her left wrist and glanced at her tattoo, the only physical evidence left of her gang days, except for the scar behind her ear, hidden by her thick, dark hair. The brand at the base of her hand was a small purple crown, tipped with red jewels—the color of rubies, the color of blood. The color las Reinas wore when they wanted their enemies to be very, very afraid.

Her eyes flashed to the man in black. He stood in front of the stage, his face hidden behind a mask she could now see was tied with a blood-red ribbon. He raised a hand toward her, beckoning, inviting, demanding.

With an intrigued smile, she stepped nearer, inviting the music into her blood. The bongos beat a sway into her hips and the horns blared the shimmy into her shoulders. The minute the flesh of her fingers finally slid into his warm palm, he tugged her forward against his chest, rock hard and flowing with pure, male power. She’d just danced herself into danger of the most carnal kind.

And after one glance into his hazel eyes—flecked with slivers of deep jade green—followed by the tandem swivel of his hips pressed close to hers—she knew.

Danger with a capital F. She smiled cryptically. The cabrón. Did he really think she wouldn’t recognize him?

He grinned, emphasizing the thin, sculpted line of facial hair that traced from his sideburns down his strong chin, then spiked up toward his full lips. The dark streak of a moustache dashed across his upper lip and the wicked triangle below his bottom lip made him look like el Diablo himself. To anyone else, his disguise might have been convincing.

But not to the girl who’d given him her virginity.

“So, where have you been all my life?” she asked him in Spanish.

Or more specifically, for the last two months. On their last mission together, Frankie Vega had taken a bullet that had nearly cost him his life. Before she’d left for Mexico, she’d stayed by his side, making sure that he lived long enough to turn her life upside down at least one more time.

He didn’t answer her question, but instead, spun her skillfully beneath his arm, then stepped into the dance with sure and certain fire. Marisela matched him twist for twist, turn for turn and kicked-up heel to kicked-up heel. Gazes locked, they danced the full breadth of the song until just before the final verse, when he slid his hand to the small of her back, yanked her flush against him, and then spun them off the dance floor into a corner behind the bandstand.

He pressed the wall and a door slid open. Marisela bet the cops out front didn’t know about this hiding place, though she wasn’t surprised Frankie had found it. He had a talent for finding places he wasn’t supposed to be. With a slight gesture, he invited her inside. Once they were through a narrow archway, a steep and winding stairwell emerged from the shadows. Marisela freed herself from his bone-melting embrace and placed her palm squarely on the center of his chest.

“Where do you think you’re taking me?” she whispered, her nose skimming the rough texture of his chin.

She laughed. Frankie had called her many things over the years, but witch had always been one of his favorites.

“To heaven, huh?” She traced his slim beard, enjoying the textures beneath her fingertip—the smooth heat of his skin, the prickly pinch of his razor-thin beard which effectively covered the scar that she knew lingered beneath his bottom lip. “You look more like el Diablo than any angel I’ve ever known, señor. But then, that’s the idea, isn’t it?”