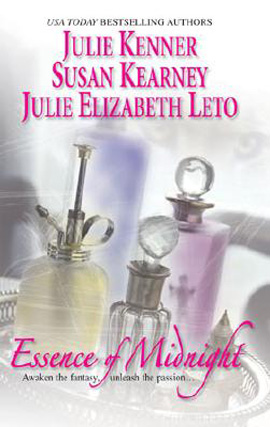 Julie’s anthology contribution Surrender is also available in e-format as part of the DARK AND DANGEROUS collection of paranormal treats. You can read all about it here.

Luc Agassou lives a half-life, a cursed life. Part feline, part human, he stays in the shadows, searching for his true mate, the one woman who can save him. When he finds Caitlyn Raine, he knows she’s the one. But in order to tame him, Cate will have to give in to her own primal urges—if she dares…

“Touch Me” by Susan Kearney

Lost in the mists of Agent John Cameron’s memory is a dangerous secret-one that’s buried so deep, even John can’t remember it. Only the touch of Dr. Bonnie Anders breaks through the barriers he’s set up in his mind. But it’sJohn’stouch that blows away Bonnie’s professional reserve—and her inhibitions…

I can touch her!

Viktor Savitch peered through the flattest pane in his prison of glass and watched Evonne Baptiste drop onto her bed, her dark blonde hair falling like a curtain over her face. Exhaustion and shock had played a sinister game with her delicate features, but as she drifted into the serenity of sleep, he imagined her a creature of light and magic.

And he’d touched her! The experience had apparently sapped her energy, but he hadn’t felt this alive in one hundred years. A great trick, since he was still very, very dead.

Despite that fact, he could almost feel his hands thrust onto his hips as he threw his head back and laughed. He didn’t have a body for such an action, but the impression remained the same. Blood surged through invisible veins. His non-existent chest rumbled with mirth. His vision, cloudy before, now stood blocked only by the curve of the glass. For the first time in ages, the essence of life swelled around him.

An essence he would harness. Soon. To live again, he’d do whatever he had to do, knowing that some tasks, like seducing Evonne Baptiste, would be more pleasant than others.

When he’d first died, the phantom presence of his physical self had been strong and vital, just as he had been. But over time, he’d faded. Slowly. Painfully. His punishment for his life of arrogance exacted a precise toll. But now, had the powers of the ethereal world decided that he’d done his penance? Had they gifted him with the means to escape?

To hell with them, Viktor cursed. He’d get out, and he’d do it on his own.

Evonne stirred, a soft murmur spilling from her wine-tinged lips. Once again, Viktor reacted, as if a heart slammed beneath the imaginary ribs of his chest. Even the crick in his thigh from where they’d stabbed him so long ago throbbed again.

He’d deal with the pain if he had to. After all this time, he’d found a means to communicate with the world outside his prison. And he couldn’t have ordered a more perfect medium. This one, this Evonne Baptiste, not only possessed the ability to speak with those who had died, but she was haunted by an unsatisfied hunger for those intimate needs Viktor had once commanded above all other men, dead or alive.

Could he find the means to satisfy her? Of course. He could feel his power increasing, even as she slept. For her part in his rejuvenation, she deserved the greatest gift he could bestow. A woman so beautiful, so responsive, so open to the possibilities of the magical world deserved more than just his gratitude. He would grant her whatever she wished, whatever he had the power to give.

Not for a century had he felt so strong and aroused. Had he ever experienced such an intense craving in life, when seduction had simply been his means to attain power? He’d twisted so many Romani traditions to keep his family together. And he’d paid the price—with his life, with a long, torturous and painful death. With denial into the otherworld.

He hadn’t been dead long enough to forget one detail. His murder at the hands of the witch was as clear in his mind as the supple curve of Evonne’s backside as she lay prone on the bed. But he wouldn’t think about his death now. The possibilities for revenge had long lost their sweet flavor, especially when the chance of life was just a concentrated touch away.

Outside, he’d manipulated the breeze, calling on Bavol, spirit of the air and wind, something he’d accomplished only once as a young man when studying with his shaman grandfather. After the great Chovihano’s death, Viktor had been sent away, forced to live in the gaujo world of the English aristocracy, where he’d forgotten his shaman magic and instead learned other means to attain power. At twenty, he’d returned to his tribe, keen to use non-Romani methods to rule as sherrengro, as chieftan. As Gypsy king.

After a decade of rule, his skills to call upon the elements, to foresee attempts on his life, had been so unused in his adulthood that he hadn’t been able to block the blow that killed him. But tonight, he’d tapped into that long dormant power. Could he do so again? Could he convince the woman on the bed that she was the key to his release?