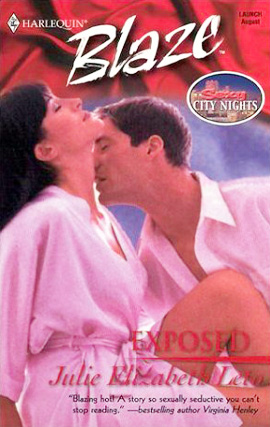 One woman looking for love. One man seeking an escape. One incredible interlude that could only occur during…SEXY CITY NIGHTS.

Ariana Karas is feeling restless—and an affair with a sexy stranger sounds like just the cure. Maxwell Forrester is about to marry one woman…and can’t stop lusting over another.

When Max finds himself captivated by exotic Ariana at his own rehearsal dinner, he knows he’s in trouble. Especially when he wakes up the next morning to find her in his bed—hours after his wedding should have occurred! Though with Ariana in his arms, it’s hard to have any regrets…until he discovers he was deliberately set up. Together, Max and Ariana search for the truth. Only they never dream it will leave them both EXPOSED….