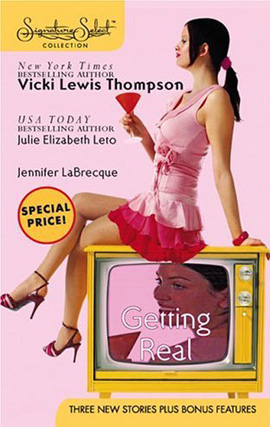 Charlotte “Charlie” Cuesta and Sam Ryan are rival P.I.’s—and former lovers. But when she finds herself partnered with sexy Sam once more—traveling cross-country in a reality show—she can’t help wondering if he’ll get even before she falls for him again…or after?

No answer. She didn’t expect one. She’d spoken to Sam ten minutes ago and he’d told her he planned to shower. As loathe as Charlie was to confront Sam Ryan while he was naked and wet, she didn’t have much of a choice if she wanted privacy from the game show’s cameras. The only place where the contestants weren’t watched was in the bathroom.

She clutched the towels close to her chest. Come on, Charlie. It’s not like you haven’t seen the man naked before.

The memories made her quiver.

With a quick glance as soon as she entered, Charlie spotted the camera in Sam’s room, angled away from the mirror. Knowing the camera was accompanied by a microphone, she continued her jaunty whistling, but softly, as to not garner any unwanted attention.

She walked into the bathroom without hesitation. If anyone witnessed her entry, they’d surely think she had every right to be there.

The minute she caught sight of a naked Sam through the smoky glass shower doors, she froze. The towels nearly tumbled from her arms, but she caught them. Damn, he was gorgeous. Tanned and buff, he moved with casual grace as he soaped his skin and sang some tune that sounded mildly country-western. She rolled her eyes, allowing his fondness for annoying music to snap her out of her lusty reverie.

From the moment they’d met nine years ago, both rookies at the police academy in Tampa, Florida, they’d marveled at the differences between them. She preferred Latin Fusion to his country twang. He was a vegetarian and she was a devout carnivore. When out of uniform, he wore blazers with his blue jeans. She preferred slinky skirts and tottering heels. His ideal Friday night date had been popcorn and an action flick, followed by a beer at his neighborhood tavern. Though she didn’t mind an occasional bust-‘em-up movie, popcorn stuck in her teeth and her thirst wasn’t usually quenched by hops, malt and barley. No, she preferred dancing herself into a slick sweat, then cooling herself down with an icy mojito.

They were apples and oranges. Actually, more like apple pie and mangoes.

She jumped, startled as he swiped the glass with his hand, clearing his view. Even beyond the fogged shower door, his blue eyes sparkled above his signature smug smile.

She dropped the towels on top of the sink.

“We need to talk,” she answered.

“About your propensity for voyeurism?”

She smirked. “All those big words,” she quipped, thickening her accent and ignoring how boldly he stood there in all his naked glory. “Aren’t you afraid I won’t understand?”

He slid open the shower door, his grin not wavering. Dollops of hot water drizzled off his skin and the steam quotient in the tiny bathroom increased to dangerous conditions. Visibility, however, wasn’t hampered. Charlie had to concentrate hard to keep her eyes trained on his.

Not that looking into Sam Ryan’s eyes was any safer than taking a leisurely perusal of his body. Piercing blue with flecks of gold, his irises could bring a lesser woman to her knees, especially with the frames of thick, chocolately lashes that were two or three shades darker than his hair. When he was dry, that was. When wet, his hair spiked into dark, sharp tips that could only be tamed by a woman’s hand.

“Don’t play stereotypes with me, Charlotte. You know I don’t have anything but the utmost respect for your incredible…intellect.”

Even though she was dressed in the dowdiest, frumpiest unbelted housedress in the drabbest gray ever created by uniform manufacturers, his hungry expression made her feel like one hot mama in a halter-top and miniskirt. A leather miniskirt. With fishnet stockings and spiked heels. Moisture tickled between her breasts and her mouth seemed coated with cotton.

“Is that why you’re letting me win this game without you?” she asked.