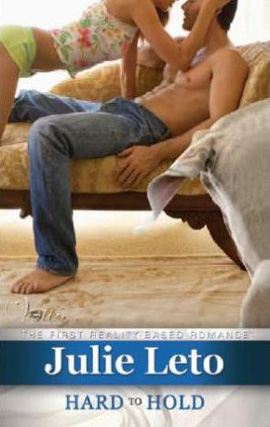 New York lobbyist Michael Davoli feels like he’s been sucker punched when he meets Anne Miller at a concert. When fate leads him to move into same Albany apartment building where Anne lives, Michael falls hard. After all, Anne’s hot, his dog likes her, and she’s catnip to the senses after she picks a lock faster than Sydney Bristow can disarm a nuke.

Always fiercely independent, Anne’s crackerjack reporting skills and keen intellect are no match for the chemical reaction she has to this man with electric blue eyes. But while Mike effortlessly holds her with his gaze, he withholds the embrace she longs for. Why is he so distant? Has Anne misread his signals? When he finally confesses that he suffers from a neurological disorder that he’s learned to disguise from others but could keep him from ever holding her through the night—she makes a choice that changes the rest of her life.

Anne isn’t about to let anything like Tourette’s Syndrome keep her from the man of her dreams. But Mike has a second secret. Will this secret be the one that even a grand passion cannot survive?

With her trademark wit and sensual artistry, Julie Leto knocks this unforgettable romance out of the park and straight to the heart. Based on the true love story between Mike Davoli and Anne Miller, Hard to Hold is a modern day fairy tale that proves that the best things in life—and in romance—are real.

Michael slid the box of CDs he’d just lifted back onto the flatbed of his father’s truck and yanked tight on the leash he’d tucked into his pocket. His sixty-five pound Weimaraner, thrown into hyper-drive by something interesting on the other side of the vehicle, tugged until his shoulder ached. The sensation of her narrow tail, wagging so hard and fast he suspected it might start rotating and lift her up like a helicopter, sliced at the thigh of his jeans. With the frigid February air already biting through the denim, the pain was more than a little annoying.

He was just about to mutter a frustrated (yet utterly without conviction) curse of “Stupid dog,” when he heard a distinctly feminine voice say, “Michael?” from the other side of the curb.

One solid yank on the leash and Sirus fell into an obedient sit. She panted, still excited to meet whoever had spotted him outside his new apartment. He was curious to find out who it was, too. The voice sounded familiar. He hadn’t expected to see anyone he knew while he transferred the contents of his life to his new home. Particularly no one of the female persuasion. Yet when he caught sight of the woman, he suddenly understood his dog’s enthusiasm. Bundled up in the most ridiculous green wool scarf and hat he’d ever seen—and looking entirely breathtaking in it—was Anne Miller.

Though he’d been in Albany for months, he hadn’t run into the beautiful brunette since their initial introduction at the Tweedy show and he’d been too busy with the holidays, work and moving to track Shane down and ask about her friend. He’d meant to, but as first impressions were powerful and he’d screwed his up with Anne, he’d wanted to arrange an ideal time for the second.

Instead, he was greeting her while sweaty and dirty from moving boxes of his belongings from his father’s truck to his new digs.

The fact that he’d acknowledged the newcomer sent Sirus into a renewed apoplectic frenzy. She leapt into the air. Her leash kept her tethered, but as Weimaraner’s seemed to have springs bred into the bottoms of their feet, the dog looked like a big gray bouncing ball hoping to greet this new person properly.

Anne laughed, which didn’t much help his attempts to calm his overwrought pup.

‘She’s a handful,” Anne concluded, but not without a smile.

“Normally, she’s incredibly well-behaved. But she’s been stuck either inside the truck or in the bedroom upstairs since we started moving, so she’s a little over-excited. I think she just needs to stretch her legs.”

Michael glanced up at the sky. Sunset was maybe forty-five minutes away and they still had an entire truckload to drag upstairs before the temperatures dropped and they lost their best light source.

“No time. My dad’s helping me get my stuff upstairs and he doesn’t want to drive back home too late.”

She paused a moment, pressing her lips together as if she wanted to say something, but wasn’t sure she should. Her hesitation, however, only lasted a split-second.

Mike glanced at the heavy boxes in the truck and then back at Anne, not sure what surprised him more—that the woman who’d occupied more than a little time in his thoughts over the last two months had suddenly appeared out of no where or that she was offering to help him lug heavy boxes into his new place.

“I don’t want you to hurt yourself,” he said.

“The dog will settle down,” Anne assured him, bending down so that she was eye-level, but still at a safe distance from Sirus. The dog had stopped doing her imitation of a Slinky, but was still attempting to wriggle out of her skin.

“No, I thought you meant,” he cut himself off before he made too much of a fool out of himself. Again.

He gave the leash a forceful yank, calling Sirus to his side. She obeyed immediately. She responded when Mike meant business. This wasn’t often, as he tended to spoil the pup rotten.

The dog’s anxiety fed off his own. Despite obeying his command, the dog strained against her collar. She obviously wanted to know Anne better.

Yeah, well, she could join the club.

Mike knelt beside his pet and motioned Anne forward.

“Sirus, this is Anne. Anne, meet Sirus, the wonder pup.”

“Hello, Sirus,” Anne said softly and the breathy sound of her voice warmed him like a gust of summer wind. The scarf, which looked rustically hand-knitted, brushed against her cheek, which was flushed with color. The fact that her jeans curved quite nicely around her hips as she knelt didn’t hurt, either.

The inside of his mouth parched to desert-like conditions. He was very thankful he didn’t have to speak again for a while. Anne had taken over the conversation, which was completely centered on Sirus.

“You’re a beautiful lady, aren’t you?” she crooned to the dog, holding out her hand so that Sirus could give her a good long sniff. The dog’s butt and hind legs started rocking as her tail struggled beneath her. She wanted to obey Mike’s sit command, but she also wanted to tackle Anne and more than likely, lick away at those adorably rosy—and God help him—freckled cheeks.

Before he knew it, Anne was petting the dog, giving her extra scratches behind her ears. Inch by inch, the dog stretched closer.

Okay, it was a stupid, obvious question, but with moisture absent from his mouth and his bloodstream pumping with the kind of powerful attraction he hadn’t felt in a very long time, he was lucky to form even three words of coherent conversation.

“Oh, yeah,” she said, dropping her knees in front of the dog so she could scratch both of Sirus’s ears simultaneously. For her trouble, the dog gave a long, appreciative swipe of tongue across Anne’s face.

“Sirus, don’t lick,” he admonished, standing and pulling the dog back into a more controlled position.

“It’s okay,” Anne said, wiping her hands over her face. Unadorned with much makeup, her face glowed pink and pretty. “She’s just being a dog. What breed is she?”

“Weimaraner. I rescued her when I lived in Portland, though she’s returned the favor since.”

Anne arched a brow. “Now that sounds like an intriguing story.”

He remembered her telling him back in November that she was a reporter. Apparently, her instincts were well-honed.

“If I want to get moved in before nightfall, I’m afraid the story will have to wait.”

“I can’t believe you’re moving in here,” she said, shaking her head, but smiling.

“I can’t believe we ran into each other again,” he confessed.

“Actually, the biggest coincidence comes from the fact that I live here, too. In this building, I mean.”

Mike couldn’t stop the grin the burbled up from deep in his belly and then spread through his extremities. He suspected he could take off his coat right now and not feel the least bit of discomfort.

“No, I’m not,” she said, standing. “There’s a park right around the corner. Why don’t you let me take the dog while you move your stuff in?”

“Really? My dad just took some stuff upstairs and Ben’s coming over later with his car, but not having her underfoot would be a big help.”

Anne slid her hand up Sirus’s leash until her hand was inches from his. Just when he thought their fingers might touch, she tugged the loop out of his hand. “I’ll take care of her. We’ll go for a walk and then I’ll bring her up to check out her new digs. What floor are you on?”

Mike had to think. Before Anne had shown up, he’d known the location of his apartment. Now the information had retreated to a remote corner of his brain, probably to escape the powerful chemical reaction brought on by Anne’s proximity. Anne was beautiful. Anne lived in his building. Anne liked his dog.

He’d hoped that his move to Albany would spark a change to his life, but he’d never expected for kismet to explode with such power.

She smiled. “I’m right below you. 2-D. Welcome to the building.”