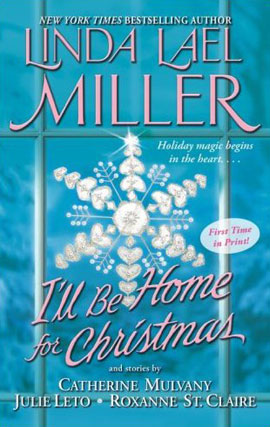 I’ll be Home for Christmas

A collection of heartwarming holiday stories from today’s stars of passionate romance!

delivers a holiday miracle in the bittersweet tale of a young woman who can’t hide her broken heart — or her past — when she returns to her hometown. But a sexy widower may just help her discover the true meaning of home in “Christmas of the Red Chiefs.”

spins a fairy tale come true in “Once Upon a Christmas.” They flirted as teenagers, but it takes time — and some divine intervention — to bring two star-crossed lovers together at last.

pairs fire and ice in “Meltdown,” the sensual tale of a Cuban-American PR whiz whose job description includes thawing out her CEO boss’s frosty image. Will their sparks torch into flames of passion?

unwraps the thrills of Christmas in New York, where a female bodyguard toys with a dangerous desire for a mysterious hunk while protecting his young daughter. It’s a risky game with passion as the prize in “You Can Count on Me.”

Isabel slammed the file drawer shut. The sound vibrated through her before bursting through the deserted office like a sonic boom. Coming in to the office so late had been a lesson in frustration, but since the boat sailed into port this morning, she hadn’t been able to think of anything but Simon. Simon winking at her. Simon smiling at her. Simon speaking to her in soft, rich tones that made her insides pulsate with needs she dare not name. The worst part was that her obsession wasn’t stemming from the board’s directive. She’d hardly thought about them at all. She wanted Simon to loosen up for purely personal, particularly sexual reasons.

“This is insane!” she screamed, slamming the file against the metal drawer.

She started, but the warmness in Simon’s deep baritone soothed away her fear instantaneously. Slowly, she turned to find him leaning against the doorjamb to her office, his tie abandoned, his arms crossed dashingly over his broad chest, his eyes glittering with something she’d never seen in them before.

“What are you doing here?” she asked, inhaling deeply even as she tried to hide the calming move from his view.

“Trying to avoid you,” he replied.

He pushed off from the door and before she could retreat, he’d invaded her personal space—not close enough to touch without reaching, but close enough so that the sandalwood and musk in his cologne teased her nostrils and heated her already balmy skin. She glanced around, hoping no one else was here to witness this…what? A breach in office etiquette? A sexually charged moment? More like a one hundred and eighty degree personality change.

“You’ve been gone all week,” he explained. “Six whole days, not counting the weekend. And yet, for some reason I either can’t figure out or don’t really want to, I haven’t been able to get you off of my mind.”

She stepped back. Isabel wasn’t one to retreat from any man, but she hadn’t come into the office to pick up a few things before tomorrow’s workday with any preparation of meeting the man that had somehow, in her absence, become the man of her dreams.

“Is that the same mind that you’ve so obviously lost?” she quipped, hoping to offset this suddenly uncomfortable interaction.

The corner of his mouth quirked into a roguish grin.

“Okay,” she said, pounding her fists onto her hips. “Who are you and what have you done with my boss?”

The grin spread to the other corner of his mouth and even reached his eyes, which sparkled sapphire in the dim office lights.

“Let me introduce myself,” he said, reaching down to capture her hand, which she was sure shook as if she’d never touched a man before. “Simon Brennan, CEO of the Making Moms Foundation.” He lifted her hand to his lips and brushed a kiss over her knuckles. The contact ignited a flash fire that instantly blazed across her skin. “And you are?”

Melting into a puddle on the floor?

“Confused,” she whispered. He was so close, any higher volume would have been a waste of energy.

He cleared his throat and dropped her hand. Damn him.

“I was trying a new tactic.”

He backed away, giving her the reprieve she needed to cross her arms protectively. “And this new tactic would be?”

He frowned. “I was going for charming. How’d I do?”

Man, oh, man, couldn’t he tell? The crossed arms weren’t just for comfort. She was quite certain her nipples were poking straight through her bra and blouse. His instant off-switch, on the other hand, made her frown deeply.

“Not half bad, if you were the CEO of a brothel or chain of strip clubs. I’m not sure wicked playboy is the personality type the board of directors of a charitable foundation would appreciate running their show.”

He nodded, though his smile returned briefly, just after she’d said, wicked playboy. “Yeah, I was concerned about that. I guess we’re going to have to keep working on the new, improved me.”

How could she possibly improve on perfection? Okay, granted, the Simon Brennan she’d just experienced wasn’t going to save her job or his, but she was certain that charmer could do amazing things in her bedroom.

She cleared her throat and marched back to her desk, trying to come up with something halfway professional or intelligent to say. Unfortunately, with her knuckles still trembling from the contact with his lips, she couldn’t form even the simplest coherent thought.

“How was your trip?”

His words signaled a return to their normally cool and casual tenor, but his tone remained deep and bone-melting.

“Nothing to write home about.”

“Not much reason to write home when your entire family was with you, right?”

Isabel smiled. Yeah, he had a point.

“My family actually isn’t so bad. Don’t tell anyone. We’re very dysfunctional. We actually like each other.”

He feigned shock. “How politically incorrect!”

She couldn’t deny the opening. “What about your family? I’m assuming you have one?”

“I wasn’t spawned in the icy waters in some mysterious polar region, if that’s what you’re asking.”

The hint of humor in his voice, unexpected, but welcome, kept her from feeling guilty about how her question sounded. “That’s not what I’m asking. You simply don’t talk about parents or siblings. You don’t have pictures in your office.”

He nodded and surprisingly, slipped into one of the pair of chairs in front of her desk. Isabel sat beside him on the matching chair, allowing herself only a split second to notice how close their knees were to touching. “The pictures I have, and admittedly, there aren’t many, are at my condo, placed there by my mother. I also have a brother who lives in Los Angeles. In fact, I had dinner with my mother tonight. You might have heard of her? Jennifer Brennan Davis?”

“Her husband is one of our biggest donors.” Isabel knew her eyes had widened to the size of saucers. “She’s not old enough to be your mother!”

“That’s what her parents said when she came home at fourteen, pregnant and in love with a loser.”

“Didn’t expect that I was the child of a teenage mother just like the ones we help?”

“Even if I did—which I didn’t—I never expected you to freely admit something so personal. Not that there’s anything wrong with admitting your connection to the foundation’s goals, but I’m just surprised at your candor.”

He leaned forward, balancing his elbows on his knees so that mere inches existed between them. His fingers dangled perilously close to where the hem of her skirt flared over her lap. What would it feel like, she wondered, if he reached forward and explored the sensitive flesh of her thighs?

After a moment’s hesitation, he looked up at her with hooded eyes. “I’ve had a lot of time to think about what you said to me before you left. And I think that opening up about my past, maybe just to you, might make it easier for me to relate to the women we work with here.”

Isabel’s chest tightened. He wanted her to be his confidant? Oh, this was a mistake of monumental proportions—for reasons too numerous to number and too personal to admit. How was she supposed to keep her hands and dirty thoughts to herself when he was about to unburden his soul to her?

And yet, she managed to clamp her mouth shut. He’d refused to open up to her when she’d made the suggestion to him last week, but he’d obviously had a change of heart. In fact, he was so warm, she was sure that one glance from him could turn any one of the cruise ship’s famous ice sculptures into a dripping mess in ten seconds flat.

She prayed her voice wouldn’t betray her once she opened her mouth to speak. “That sounds like a very enlightened idea.”