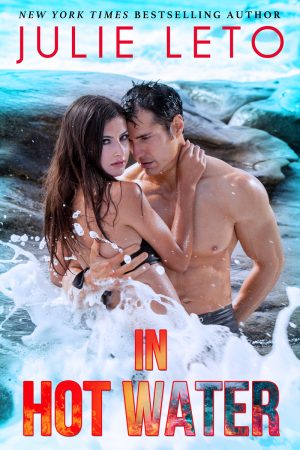 From fairytales to fantasies…

Novelist Tessa Dalton has no more secrets.  During her sordid divorce trial, everything about her was exposed, mocked, exaggerated and judged—including her super-sexy books. Once the judge granted her freedom, she had a choice: slink away in humiliation or own her bad girl reputation In sultry Key West, her pick is as easy as their world famous pie.

But journalist Colton Granger isn’t fooled. He’s a pro at digging deep for a story—and the mystery he wants to solve is Tessa.  She’s exactly the kind of woman he craves. Sensual. Uninhibited. Imaginative. But she’s also trouble. Her ex wants revenge. His bosses want him back on the beat. Every second they spend together pushes them deeper IN HOT WATER…

Will they flounder beneath a tidal wave affair…or burst into once-in-a-lifetime love?

Colton saw the firelight first—tiny flashes of orange flame dotting a dark mass of land a half mile off the boat’s bow. Torches? Colton drew in a sharp breath and shook his head, trying to avoid a mental comparison between his current situation and a final episode of Survivor. But try as he might, he couldn’t help but find similarities between his situation and that of the contestants marching up a torch-lit path to receive their judgment. Soon he’d walk the gauntlet to his fate—not for money, but for a once-in-a-lifetime chance at intense, unforgettable pleasure. And if his strategy succeeded, he’d possess the nirvana he craved—and for more than the one night Tessa expected.

Over the sound of the rushing waves and the drone of the high-powered engines, their position was announced by his guide for the evening, Captain Willa Lawson—a blatantly intimidating woman with enough physical presence to dump his ass overboard if she thought for one minute he was up to no good.

“Grab your duffel, lover boy. We’ll be on Speed Key in five.”

He did as she commanded, hoping she at least intended to pull up to the dock, which he could now see, thanks to reflective red lights at the edge of the structure. Not that Colton didn’t intend to swim tonight, but he’d rather do it after he stripped out of his traveling clothes. Just in case, he kicked off his loafers and tucked them into his bag. He never could trust a woman who wore combat boots on her off-hours.

From the moment his plane landed at the airport, the trip had shifted into truly surreal territory. Willa, wearing cutoff jeans and a much-worn Coast Guard T-shirt, drove up on a battered old Harley and retrieved him with little fanfare and even less conversation—though she’d made time to check him out from head to toe, even going so far as to circle him at baggage claim, her hands clasped behind her back, her Coast Guard ball cap shading her sharp eyes as she hummed her assessment. The sound had denoted neither approval nor disapproval. She clearly hadn’t decided if he measured up.

On one hand, he appreciated that Tessa had cultivated strong, protective friendships in her brief time on the island. A woman living alone needed someone to watch her back. On the other hand, he considered coating his skin with tenderizer and maybe smearing on some steak sauce in hopes of making his meat more palatable to the suntanned, buff-to-the-bone woman who eyed him so skeptically. Willa obviously wasn’t going to deliver him to the prearranged destination unless she thought he was worth the effort.

The ride to the dock hadn’t been much friendlier, though Willa had been gracious enough to point out a few of the sights. Not that Colton cared much about the historic Casa Marina hotel or the Hemingway House, but he appreciated her attempts at hospitality all the same. At the marina, he’d even offered to assist with the boat. She’d declined, though his manners had at least earned him half a smile. Or half a smirk. The darkness and Willa’s ambiguous snort had kept him from being entirely sure.

But soon this first impression wouldn’t matter. Willa obviously intended to bring him to Tessa, despite any misgivings. And she wasn’t the only one with doubts. When Tessa had agreed to his terms, she hadn’t sounded quite as enthusiastic as he’d hoped. The wary crackle in her voice, the skeptical tone, forced him to consider if he’d asked for too much too soon.

Less than a year and a half had passed since her divorce and despite Tessa’s tales of wild living, Colton suspected her scars hadn’t completely healed. Unlike other women who might have thrown themselves into their careers or cordoned themselves off from a social life, Tessa had parachuted into living like a daredevil. Thanks to her lifestyle, he’d have to employ extreme measures to impress her. Flowers and serenades wouldn’t win him a woman like her.

For Tessa, he had to push the limits.

As the boat neared the private island’s slim dock, Willa pressed on the horn, playing a four-note tune that likely alerted Tessa to their arrival. The engines rumbled as they idled, the water beneath the boat surged, rocking the deck like the floor in a fun house.

Colton grinned. Anticipation pumped his blood, tightened his groin. In the back of his brain, he heard screeching electric guitar—the opening lick of Welcome to the Jungle.

Flaming golden-red tiki torches stood in the sand, forming a curved line that led from the end of the dock along a path hidden by a thick expanse of trees. Thin wisps of charcoal smoke curled into the night, teasing his nostrils with the piquant scent of citronella.

And Tessa waited, likely, just beyond the darkness.

With a gentle jostle, Willa eased the boat against the bumpers fastened to the dock, then gestured for him to disembark. She held the boat steady with a tight grip on the line.

Before he stepped completely onto the dock, Willa knocked him on the arm with her fist. Not enough to hurt, but enough to get his attention.

“Tread carefully,” she advised simply, then winked.  After a skillful retreat and nautical U-turn, she disappeared into the darkness.

“Tonight isn’t about careful,” Colton whispered to himself, unsure about who might be listening.

At the end of a the dock, an open treasure chest brimming with gold coins blocked his descent on the half-dozen stairs leading to the beach. He dug inside and laughed. The glittering doubloons were actually cleverly packaged condoms.

He dropped his duffel bag. A quick dig revealed that she’d stuffed the box with newspapers, so maybe fifty or sixty prophylactics were in the box. Still, while he was no slouch in the stamina arena, he doubted she meant for him to use more than a few of these babies in one night.

Her attempt at intimidation had worked—for a minute.

Colton chuckled, pocketed a few, then after giving the situation some thought, changed his mind and tossed them back. Instead, he glanced quickly over his shoulder to make sure Willa had definitely departed. He stripped out of his clothes, retrieved his swimsuit from his bag, put it on, and tucked one condom into the waistband. Then he pulled out the smaller mesh bag he’d tucked into his duffel, glad he hadn’t been chosen for a random security search. Nothing he’d carried with him was dangerous—except in the hands of a man planning a delicious seduction.

Since Tessa had warned him that this interlude might very well be all they ever had, he was determined to make sure every moment counted. When it came to the words he chose for his columns and for the book, he always went for quality, not quantity. And so far, his approach had served him well.

Slinging the mesh bag over his shoulder, he left the rest of his belongings on the dock and followed the tiki torches down the path. The sounds of the tropical night—the rustle of palm fronds in the balmy breeze, the whine of mating crickets, the rhythmic ebb and flow of the cool waves on the shore—enhanced his impatience. God, he hadn’t seen Tessa in so long. And their one meeting had been short—fifteen, twenty minutes, tops.

But it had been enough to convince him to step outside his comfort zone, first with the book and now with this liaison.  He was taking a risk, but with no risk came no reward.

He broke through the last gate of palm fronds and caught sight of Tessa lying near the water’s edge, fire gleaming from a concentrated collection of torches, circling her in a mystical ring, just as they’d discussed.

His chest tightened. A thin sheen of sweat broke out over his bare skin. He speared a hand through his hair, amazed and aroused. Until this moment, he hadn’t believed she’d really go through with throwing herself into the sexual role-playing.

He should have known better.

Firelight sparkled on her moist skin, wet as if she’d just emerged from the storm and sea. Translucent from the water, the white material of her dress clung tightly to her skin, hiding nothing—not the dark circles of her areolae, not the high, taut peaks of her nipples, not the shadow of curls at the juncture of her thighs. He licked his lips, imagining her sweet taste. And even from the distance, with her face turned into the glow from the torches, he could see her mouth, pink and slightly parted, waiting for the kiss that would bring “Alina” back to life.

She didn’t move a muscle, and yet the air in Colton’s lungs rushed out.

He pulled out the mesh bag, crossed the sand to the water’s edge and with great effort, tore his gaze away from Tessa long enough to wade into the water. He’d done a little research prior to his arrival. Night swimming wasn’t the safest activity, thanks to the creatures of the deep, but Colton didn’t plan to venture far from shore. How could he, with Tessa waiting for him, so lovely, so perfect, just a few paces away?