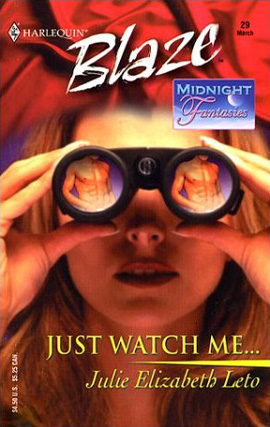 Jillian Hennessy is supposed to be watching a man suspected of insurance fraud. But when wires get crossed and she ends up watching Cade Lawrence, a sexy undercover cop on a similar assignment, the watching soon turns to wanting…and more!

Dear Reader,
MIDNIGHT FANTASIES…secret thoughts lurking in the shadows, waiting until the lights are out to slip into your mind and wreak havoc with your dreams. What a thrill to be part of this fantastic series! When I wrote my first Blaze, EXPOSED (August 2001), I toyed with the idea of voyeurism. My hero and heroine, experimenting with lovemaking out and about in San Francisco, had no idea that someone was watching them, preparing to expose their affair.

The idea fascinated me…so much so, that I decided to go further—but in a different direction. What if the heroine watches the hero without him knowing, long before they exchange one word? What if she learns intimate things about him, things she can use to seduce him? And what if she’s watching him because of her job, even if she’s breaking all the rules?

And what if, in the course of their fire-hot affair, he ends up watching her?

Jillian and Cade’s love affair is a sensual adventure, heightened by their pursuit of a man determined to keep his enemies close. And what complicates a tricky surveillance job more than the fact that they’d rather watch each other?

Jillian pulled the file on Stanley from the slot beside the video recorder. She flipped through the paperwork, searching until she found the interoffice wiretap order her uncle filled out for Ted’s tech team. She ran her finger down the handwritten entries, then found the address she searched for.

Except that Stan lived at 809.

She closed the file and buried her face in her hands.

Jillian swore, berating herself for not double-checking all the paperwork on this case. Usually, that was her main responsibility as Mick’s second-in-command. But she’d gotten caught up in the thrill of her first real, on-location, down-in-the-trenches assignment. She’d spent her time developing the operation plan, renting the house, assigning shifts for tails when Stanley puttered around town, and lastly, organizing her affairs so she could leave her studio apartment unattended for as long as it took to break this case.

Mick insisted he help. As president of the company, he was lead detective on all cases, after all. The least he could do was supervise the tech team’s installation—especially with all the new toys he and Ted had purchased at their last convention in Las Vegas.

Glancing up, Jillian acknowledged that they had done an impeccable job. The views were clear. The sound crisp and free of static. She heard the precise moment Cade flipped on his portable CD player, filling the attic with the delicate sounds of Korean shaman music. Only problem was, instead of watching and listening in on a suspected con-man, her vision focused on Cade’s tapered back, slim hips, and most incredibly perfect backside—the one she’d watched nearly until sunset. The one she’d promised herself she would avoid.

The one she couldn’t tear her gaze away from.

Cade stood in the center of the room, tall and broad and completely still. Then with a quick, noisy inhale, he pulled his arms in front of him, steepled his hands and breathed. She couldn’t help but watch as air filled his lungs, pumping his pecs with perfection, flattening his washboard stomach so his pants slipped a quarter of an inch lower than they had been before. When he breathed again, so did she—and the reality that she hadn’t taken in air dawned slowly, like a summer sun that rises—and grows instantly hot.

“No!” She twirled her chair away around so she faced her bed rather than the screen. I can’t do this. I can’t watch. My heart can’t take it. My body won’t survive. She switched off the screen without looking, without allowing herself to think.

She glanced at the clock at the bottom of her laptop screen. Too late to do anything about this screw up tonight. Too late to even call Ted, whom she knew was on a surveillance assignment on the other side of Orlando, nearly two hours away. She had no way of salvaging this operation until tomorrow. Her logical, practical mind toyed with the idea of turning off the rest of her equipment and getting a good night’s sleep.

She’d clicked off the visual, but the sound echoed through the six-inch speakers on either side of the darkened main viewer. Even, calm, male breathing became sharp whooshes of air. He’d completed his stretching and had begun his work out. The rough stuff. The real, sweaty, muscle-bulging, body-flinching part.

Rolling her eyes at her own weak will, she clicked the screen back on. Who was she kidding? This man wasn’t someone to be turned off. She couldn’t tear herself away, even if she wanted to.

Which she didn’t. No matter how much Jillian told herself that watching Cade practice his forms for Tae Kwon Do was wrong—professionally, morally—even spiritually if she opted to open that can of worms—she couldn’t look away.

She wanted to look closer. Without trying, he reached the emptiness inside her and offered her a brief break from being alone. From hiding that part of her that made her a woman—the part that sought an intimate joining with a man who would stroke her soul to ecstasy. His anonymity made him safe. With this semi-nameless stranger, she had no real reason to reign in her fantasies or censor her increasingly X-rated thoughts.

What the hell. Who was she hurting? She’d never meet the guy. He’d never know she was watching and she promised to turn off the video recorder the minute he did anything too personal or potentially embarrassing.

“Okay, Cade. This is my first night on a stakeout and I’m watching the wrong guy. Make it worth my while.”