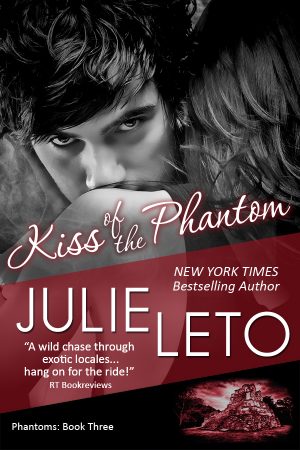 Kiss of the Phantom

After rogue archeologist Mariah Hunter dumps a cache of ancient Mayan coins in the Mexican jungle, she ends up with a bounty on her head and needs a quick cash infusion to cover the debt. So when she hears that a priceless stone is up for grabs in a remote region of Germany, she scrambles to reach it before her rivals.

Nearly three hundred years ago, in a futile attempt to rescue his family from a mercenary horde, Rafe Forsyth springs an evil trap that keeps him captive within a hidden stone. Alone with his grief and rage for centuries, he is unprepared for the rush of attraction he feels for the beautiful adventurer who liberates his body…but can she save his soul?

Together, Rafe and Mariah race against time to recover the stolen coins and discover the means to free Rafe from the curse’s evil magic. Because until the curse is broken, the Gypsy’s kiss is the truest danger of all…

The sound of the rushing water was too irresistible to ignore.

“This way,” Mariah said, grabbing the machete from Rafe’s hand. A jolt of desire shot through her the minute their skin made contact. If she didn’t know how his reluctance to use Rogan’s magic had resulted in him carrying heavy bags far into the Mexican jungle, she might have suspected that he was using the sorcerer’s powers to enchant her.

But he wasn’t. She knew it, just as she knew that she would not be able to go another night without making love with him, especially out here in the hot, sticky wilderness after she’d removed her clothes and bathed in the fresh water of the Usumacinta River, which ran through this corner of Chiapas. Fed by mountain springs of the Sierra Madres, the waterway mingled with the flow from the Pasíon River in nearby Guatemala.

The irony did not escape her.

With one determined slice, she cleared a wall of vines that opened out into a small clearing. She stepped aside so that Rafe could get the full effect.

His gasp broke through the night sounds of the jungle. She dropped the bag and unhooked the light she’d attached to her shoulder, her entire body drinking in the unmapped waterfall.

It wasn’t high. The rock formation was only about a story or two above them, but the water flow was intense down the center, causing a delicious mist of fresh water to float in the soft jungle breeze. Along the edges, the tide was stemmed by a tangle of vines popping with bright pink, night-blooming buds that swelled under the constant current. Under the light of the half moon, the water sparkled as if the crests were embellished with diamonds. The effect stole her breath, as it had his.

Mariah stepped to the edge and peered into the pool that cradled the waterfall’s offering before the rapid churning pushed the fresh water into the river. To the left, however, the water was calm, trapped still by an outcropping of rocks. She flashed her light into the tranquil water. Rocks worn round by erosion sparkled up at her. Kneeling, she slipped her hand into the billabong and cooed at the cool sensation against her skin.

Unable to resist, she ripped off her shirt and tossed it aside. She heeled out of her boots, yanked off her jeans and then touched one bare foot into the water. The rocks were slippery and she might have lost her footing if Rafe hadn’t steadied her.

She glanced over her shoulder. His dark, long hair curtained eyes that sparkled with hunger. His chest heaved even as his strong hands braced her from a fall.

“You have a habit of saving me from falling,” she said.

“’Tis my pleasure, my lady,” he answered huskily. “Gives me reason to touch you.”

She swallowed, the moisture in her mouth catching in her dry throat. “You don’t need a reason.”

The burro had wandered over. With his nose, he nudged them out of the way, nearly sending them both into the river. Laughing, Mariah moved aside, then balanced onto a flat stone and with her hands in Rafe’s.

“Hand me the light.”

After a second’s hesitation, he released her and retrieved her flashlight from underneath her clothes. She explored the water and the nearby bank for any sign of wildlife that might not like humans in their little corner of jungle heaven. This particular area was known as home to a wild array of snakes, lizards, parrots, monkeys and the occasional jaguar. And crocodiles were not unheard of in the Usumacinta, though they were relatively rare. Still, it wouldn’t hurt to take some precautions against the indigenous wildlife.

“We should start a—”

By the time she turned, a campfire burned within a circle of stones and the burro had been relieved of his load. Rafe had not moved, but still stared down at her, his expression unreadable, but his eyes broadcasting the torture of watching her in the water.

“I thought you did not want to use his magic,” she said.

Slowly, button by button, he undid his shirt.

“I had no choice,” he said. “I cannot wait another moment.”

He stripped down to nothing and she couldn’t help but watch, willing her body to remain still even as the combination of the chilly water and hot desire made her limbs weak. He stepped boldly into the water, took her hands and washed them thoroughly, rubbing over her palms, down her fingers and along her wrists. When he lifted her hand to his mouth and kissed the sensitive center, slightly reddened and blistered from wielding the machete, electricity chased away any apprehension she might have had about making love with Rafe again. This time, it would be different. This time, she didn’t have to make love with him to save his soul. She was simply surrendering to a need that was too powerful to resist.

Something, likely a fish, swam past her leg. She jumped and landed flush against his chest. Suddenly, her decision to keep her bra and panties on seemed utterly ridiculous.

“I’m envious,” he replied, his voice husky. “But nothing in this water will harm you.”

Though surrounded by crisp, clean water, Mariah couldn’t muster enough moisture in her mouth to speak. As if he could read her mind, he cupped his hands into the pool and then raised them to her lips, inviting her to drink. As she did, the sweet water dribbled down, wetting her bra until it was translucent.

She glanced down at her nipples, fully visible and erect beneath the thin swath of lace. And before she could protest, he’d grabbed her shoulders and leaned sideways so that they crashed beneath the surface together.

The water wasn’t deep, but their splashing caused a raucous of caws from the treetops and a loud flutter of wings. Doused completely, Mariah dropped all pretense by tearing off her lingerie, wadding them up and tossing them near the fire.

Silence descended on the jungle as she swam through the pool and into the mist kicked up by the falls. She could feel Rafe’s eyes on her as she slid away from him, swimming a heads-up breaststroke when the depth changed, kicking out her legs in a wide, circular motion she knew would reveal glimpses of bare backside. With every layer of dust and sweat and dirt that washed from her body, she wanted Rafe’s mouth and hands and sex to replace them.

Seconds later, he splashed into the water behind her, but stopped his forward motion when the pool bottomed out.

She climbed the rocks just in front of the falls and turned.

“What are you waiting for?” she shouted.

“I do not swim,” he replied, treading the water with his hands.

She looked at him questioningly, then pushed aside her libido long enough to consider reality. Rafe had grown up exclusively in Valoren. The place wasn’t exactly overrun by mountain lakes of a temperature made for frolic and play.

“Shame,” she said and then stepped beneath the falls.

Leaning her head back, she allowed the water to rush over her hair. She worked out the leaves and twigs that had tangled there before stepping completely underneath the flow so the water sluiced sensually over her every curve. Hard and cold, the pounding flow aroused her even as it cleansed her, a sensation that increased when she opened her eyes and saw that despite his inability to swim, Rafe had somehow managed to cross the chasm and was now standing just out of range, the white capped swirls of water rotating around his waist.

Intermittent glimpses of his erect penis made her mouth water. She held her hand out to him and wordlessly, he took it.

After he stepped beneath the showering water, Mariah washed away the remnants of their jungle trek. She relearned how his shoulders were wide and muscled. How his stomach tapered to hard thighs and buttocks. How the small of his back drew her like hunter to treasure. She kissed a path down his spine and spotted the birthmark in the shape of a half moon not unlike the one that gleamed above them.

The water was loud, so speaking was impossible. Mariah was glad. She wasn’t sure what needed to be said. They circled each other, touching, kissing, arousing, bathing in the water and their mutual desire. Rafe grabbed her hips and moved her beneath the falls again so that with his hand possessively holding her steady, she arched her back and the water splashed across her breasts. Coupled with his mouth and tongue and teeth, the conglomeration of sensation left her gasping for breath.

She hooked a leg around his waist. Twirling out of the rush of the water, they slammed against the wall of rock hidden by the falls and kissed until they couldn’t breathe. He pressed against her, but the water made her tight. Skillfully, he used his fingers to coax a sweet rush of moisture from within and she cried out as her body responded. Lifting her bottom, Rafe filled her. She felt sure he murmured her name when he could press no deeper, but the rush of water muffled any sound.

The wall she leaned against was slippery, yet Rafe never stumbled and she never slid. He drove into her wildly, freeing her with every thrust, pushing her closer and closer to the orgasmic edge she so desperately wanted.