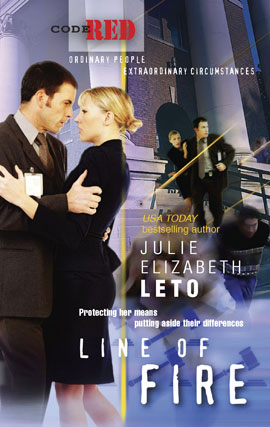 Attorney Faith Lawton steps outside the courthouse. Shots ring out from a nearby rooftop. The concrete around Faith explodes with expended bullets as a pair of strong arms pulls her back into the building….

Faith Lawton welcomes the strong embrace of chief of detectives Adam Guthrie—for the moment. His fast actions save her life. But it’s nothing personal. They’re adversaries in the courtroom and out—in spite of their often sexually charged exchanges. Now Adam’s convinced she was the target, and that the shooter may strike again. Despite her protests, he’s out to find the gunman. And until he does, Adam isn’t about to let her go…

“What are you doing?” she asked frantically, when he reached up and flipped the handle. The door opened an inch. The interior light did not go on—probably damaged by the gunfire.

“What does it look like I’m doing? I’m getting you the hell out of here.”

“Don’t be a hero, Adam! The gun range is closed. Someone inside probably heard the shots. They’ve called 911 by now. We should just sit tight and wait for the police.”

“I am the police,” he growled.

“Let me be more specific, then. You’re one man with a .38 against some crazed loon with a scope and a rifle. You’re outgunned, Adam. Deal with it.”

He smirked, though the expression did nothing to soften her steely glare. She certainly got tough and bossy when she was in danger. Probably better than weepy and hysterical, but at least he knew from experience that she could be reasoned with even in the most tense situations. Although once he really thought about it, he’d rather not have any knowledge at all about how Faith reacted to life-threatening situations. Above all else, he wanted her safe. Never in his life had someone else been injured because he’d screwed up. He’d do whatever it took to get her out of the line of fire.

“Do you hear sirens?” he asked.

She cocked her head to listen, then answered, “No.”

Adam dug into his pocket and cursed. No service. The mountains must have blocked the signal.

“We’re on our own, here, Lawton. The longer we wait, the longer he can change positions and get a better shot. Look around. The mountains surround us on three sides. You want to wait around and let this guy pin us down like ducks frozen in a pond?”

“It doesn’t freeze in southern California,” she snapped, but with a frown that told him he’d made a point she simply didn’t want to concede.

Adam grinned. “Well, it’s going to have to be freezing somewhere even farther south before I give in to some kook, even if he does have a bigger gun and a better view. Get in the car, Faith. A moving target is always harder to hit.”