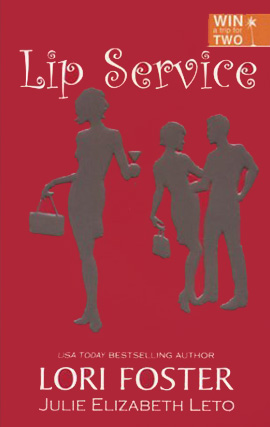 On these blind dates what you see isn’t always what you get!

Josie Jackson isn’t really a hot babe. The skimpy outfit and sexy come-on are meant to scare off Bob—her sister’s latest pick of boring blind dates. But wow—Bob is far from boring. Instant lust leads to a night of incredible passion…and a morning surprise. “Bob” isn’t Bob. He’s advertising exec Nick Harris. And that lust? It might really be love…

“My Lips are Sealed” by Julie Elizabeth Leto

Lacy Baptiste suppressed her wild, sexy side in order to become a top FBI field agent. She needs to let loose. But a blind date mix-up lands her in bed with hunky P.I. Seth Kingston—and up to her thigh-high stockings in his latest case. And she’s thinking about staying there a while…

He watched her eyes widen as the wait staff cleared the flowers and condiments from the table and presented their food. She closed her eyes and inhaled, causing him to do the same. The fiery scent of chipolte peppers, ground into a creamy sauce, then layered over buttery grilled shrimp assailed his nostrils first, hardly outdone by the garlic steaming from the Oysters Rockefeller.

The minute they were left alone, she grinned. “You’re good.”

He nodded his appreciation.

“Of course,” she continued, grabbing a shrimp by the tail and swirling it in the sauce, “I don’t know how much kissing we’ll want to do between the peppers and the garlic.”

He nodded, then scooped an oyster shell with his hand and stabbed the steamed center with a small seafood fork. “I thought of that, but if we both eat our fill, we’ll cancel each other out, right?”

He shimmied the oyster off the shell, making sure to balance the prized morsel with the creamy spinach that covered it. “Let’s give it a shot.”

He fed her the oyster slowly, watching with fascination as she opened her mouth in anticipation. She closed her eyes and the minute the flavors connected with her tongue, she groaned appreciatively. As if she’d pressed her fingers around his sex, he hardened. Would she be this wild, this unbridled in bed?

“God, those are delicious. You’re turn,” she said, reaching for an oyster.

He stopped her. “Not quite yet.” He lifted her champagne glass to her lips, staring at how her raisin-stained mouth touched oh-so-lightly against the crystal. “Try the shrimp first. But be forewarned, it’s hot.”

She met his stare boldly. “I like it hot.”

She shook her head, licking a thin layer of bubbles from her mouth. “Maybe.”

He fed her the shrimp and after they laughed over the spicy fire of the dish, he let her feed him. They cooled the peppery taste with more champagne and a shared serving of creamy strawberry soup, served cold and garnished with mint. Seth could have spent the entire night watching her lick the last of the pink concoction off the silver spoon, but she had other ideas.

She placed her napkin beside her plate and retrieved her purse.

“We haven’t even hit the main course,” he protested, though half-heartedly. He wanted nothing more than to retreat to somewhere very quiet and very private. Soon. But not before he hit her with the whole treatment. He couldn’t remember the last time he’d wanted to please a woman with simple things like sexy food and good manners. How she managed to coax the gentleman out of him at the same time she lured the aroused man intrigued him more than any throwaway comment about her job.

He didn’t care what she did for a living. He hoped it wasn’t illegal. Other than that, he was wide-open.

“The main course? Isn’t that what we’re about to have?”

He tossed a few bills on the table. He grabbed the bottle of unfinished champagne from the bucket and followed her out of the restaurant and into the elevator.

Temptation glazed her eyes when the doors swooshed shut, but a stop on the next level to pick up three more couples erased the possibility of making love to her in the enclosed space. Once they hit the bottom floor, they followed the crowd outside. She pulled her valet ticket from her purse.

“I’m parked around the corner,” he said.

He laughed, and luckily, she only looked half-insulted.

“I’m not going home with you, either.”

Seth acted on a whim, tugging her away from the crowd into a semi-private corner behind a thick potted palm.

In the tight space, he pressed his body flush against hers, as he had on the dance floor. Through the material of his shirt, he felt her nipples harden, felt her breath pant against his neck. “You’re not some kind of tease, are you?”

“Oh, I’m the best kind of tease,” she replied. “I’m the kind of tease that will follow through, but on her own terms.”

With one hand holding tight to the champagne bottle, he smoothed his other hand down her side, reveling in her intoxicating curves. “Name your terms, Lacey Baptiste.”