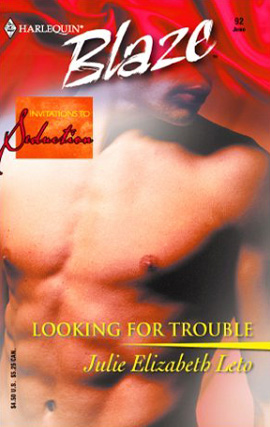 An innocent looking for adventure.
A bad boy trying to change his image.
And a book of sensual invitations that will make them forget everything but each other …

Rory Carmichael is finally free! Free from her suffocating small town, free to experience what the world has to offer…and free to experiment with all the sensual fantasies that have been teasing her, tempting her, tormenting her, at night.

And when she discovers ‘Sexcapades,’ a book of naughty but very, very nice scenarios created for lovers, she realizes she has exactly what she needs to turn all those fantasies into reality. Especially since her new landlord, sexy Alec Manning, looks like he would be very nice to be naughty with…

When Alec walked into the bathroom however, all sappy romantic images popped out of his brain, replaced with the kind of fantasies that normally got him in deep trouble.

Candles glimmered from every corner of the spacious bathroom from behind the commode to the top of the sink and the wicker hamper in the corner. They were new, barely melted, yet fresh with the scent of vanilla that had haunted him since he entered Rory’s apartment. He inhaled deeply. The smooth scent seeped into his lungs, warm and inviting.

He spied her clothes, tossed in a pile in the corner, the silky strap of her bra peeking from beneath the soft pool of her lavender sweater. He noted the bottle of lotion, the top askew, perched on the toilet tank. From the tiny white flowers and vanilla beans on the label, he guessed that’s another way the scent had seeped into the air, then wondered how recently Rory had applied the emollient to her skin, how much of the enticing scent that permeated the room was from her and how much more he could take of the homey, yet sensual scent before he went insane.

The old Alec Manning, tucked safely away in his now temporary persona of Xander Mann, wouldn’t have wasted another minute speculating. Xander would have grabbed the lotion, sneaked into Rory’s room and proceeded to smooth more lotion over her flesh, from her enticing, slim arms to what he suspected her incredibly round breasts.

Xander wouldn’t have thought twice before seducing his tenant, wouldn’t have considered how satisfying his need for sex would play against Rory’s emotions or vulnerabilities. The old Alec would have seduced her, maybe broken her unsuspecting heart, then would either have found a reason to evict her, or would have awarded her sexual curiosity with such coldness that she’d move or come to hate him. Luckily, he’d managed to contain Xander to behind the bar, since even logical Alec couldn’t destroy who he’d been in the past.

But he did feel confident he could continue to keep his old instincts under control—until he spied a sheet of paper, unfolded, yet creased, on the corner of the sink.

His eyes widened and after leaning out the bathroom door to make sure Rory wouldn’t catch him peeking at her personal belongings, he read down a little further.

He scanned the teasing blurb, his tongue thickening with each word he read. Adjectives like glistening and hot. Verbs like rub and flick and massage. Intrigued, he flipped open the page, noting that the glue seal had been broken. He’d heard about this book, though he couldn’t remember where. Probably while eavesdropping on any of the countless conversations between girlfriends sipping Cosmopolitans at the bar at Dixie Landing, pretending they were Carrie and her pals from Sex And the City.

He expected the prowling females who ponied up on his barstools to buy books like that, to be experimental in their sexual preferences. But Rory?

Great. Just great. Not only was she beautiful and honest and alluring, she was sexually curious, too. Wonderful. How the hell was he going to remain on the straight and narrow when the perfect woman lived in the apartment just above his?

Rory’s comment died the minute she cleared the threshold and caught him with her fantasy in his hand.

He laid the paper down gingerly. “Sorry. I shouldn’t have snooped.”

She pressed her lips together and swallowed.

“That’s okay,” she said finally, contradicting her forgiveness by folding her arms tightly across her chest.

“No, it’s not.” He knelt beside the tub, his wrench poised on the washer on the faucet’s base, his eyes focused on the work he should have been doing.

“I wanted you to read it,” she volunteered.

He glanced over his shoulder. “You left it there on purpose?”

She smirked. “No. Not consciously. Or maybe I did. I’m not sure. But now that you’ve seen it, what do you think?”

“Do you really want to know?”

He’d asked her the same question earlier and she’d wisely backed away from hearing the truth. But something had definitely changed since this morning when they’d first met on the stoop. Little by little, she dashed each and every preconceived notion he’d entertained about her. Where he’d first spied exuberant innocence in her baby blue eyes, her gaze now brimmed with temptation. He’d sensed her militant determination to spread her wings from the beginning, but now he suspected her pertinacity would soon thrust her into new, uncharted territory.

“Yes,” she said, her tone resolute. “I really want to know.”