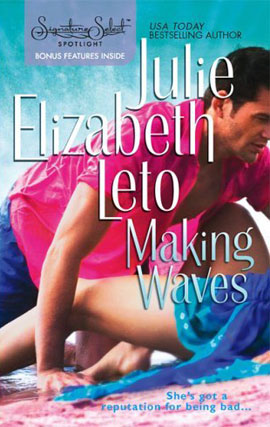 She’s got a reputation for being bad…

The attraction is instantaneous, the chemistry, smoldering. And before long, Tessa is ready to write again. Only this time, she’s got company. She and Colt burn up the phone lines, collaborating on a sensual story all of their own—a story that is recorded on paper…and reenacted in her bed. Tessa has never been so satisfied, so fulfilled. And she intends to enjoy it while it lasts. Because she’s learned the hard way that there’s no such thing as a fairytale ending…or is there?

Colton read Tessa’s Request one more time, just to make sure he’d understood. Chuckling, he hit the reply key, but hesitated before drafting a response. The woman never ceased to intrigue him. He still remembered that moment four months ago when she’d sent him the first chapter of her new book and asked him what happened next.

He hadn’t told her, of course—he’d shown her.

Colton still couldn’t believe he’d taken such a chance, writing the next scene of her book. He was a respected, award-winning journalist. He’d crafted a spotless reputation as a harbinger of truth in the two-faced world of local and national politics. Columnists of his caliber, who appeared periodically on the Sunday morning news shows and received personal invitations on press junkets hosted by dignitaries ranging from the mayor to the president, did not dabble in erotica.

But he had. He’d written the next scene of Tessa’s book from the perspective of the hero, Reides. He’d stretched creative writing muscles he hadn’t tested since college, crafting a scene from her outline as hot as it was brimming with action. At the time, he’d told himself his response was a joke, a lark. Up until then, Tessa had had too much fun at his expense with her cheeky emails and outlandish lifestyle. His foray into fiction had only given her a taste of her own brazen medicine.

But the whim had turned into a pet project and the story had burgeoned into something allegorical, mystical—and steamy. The more he read and wrote of their creation, the more he learned about Tessa. And about himself. Their occasional emails turned into a steady stream of communication, through the chapters and over the phone. When they hit the half-way mark of the book, Colton knew he’d involved himself in a full-fledged obsession with a woman who likely had no idea how much he wanted her.

Unfortunately, her priorities were flipped. She not only seemed committed to their unlikely friendship mainly because of the story they’d created together, but now she wanted her agent to market the novel to the biggest New York publishers. Though she acknowledged the sexual attraction sparking between them, running like a sizzling conduit beneath the surface of every word they wrote together, she did so with humor. As if their sensual connection was nothing more than a joke.

Only, he was no longer joking. Since she’d written the book with a partner, she needed his permission before a proposal could make the rounds, even if she had promised to use her pseudonym, Charlene Perrault.

But pen name or not, she needed him.

He considered his response to her email request for a few minutes, then settled on two words.

He signed his name, hit Send, and waited. After months of back and forth communication, he knew Tessa hadn’t sent her email query and then left the computer. She was waiting for his response. Anxious. Impatient. And no wasn’t an answer she’d accept. Just how would she attack next? Phone? Fax? Another, more persuasive email? If Lady Luck smiled his way, Tessa would hop the next flight from Key West to Chicago and proceed to convince him in person.

If that happened, he’d put his next paycheck into lottery tickets.

The trill of his cell phone sounded from within his briefcase. He glanced at his watch. Less than a minute. He loved high-speed connections. Yet after communicating exclusively with Tessa Dalton via the Internet and occasionally by phone, he looked forward to a little face-to-face.

Ultra, close-up face-to-face. Preferably something along the lines of lips-to-lips. But first, he’d have to get her real riled up, break down her interminable wall of defiance. Spark her flames of indignation. He unzipped his briefcase and pulled out the phone, comfortable with his plan. To achieve his goal, he’d take a clue from Morpheus. He’d manipulate her, plain and simple, in the best way he knew how.

You want a woman with a bad reputation, strong ideas and limitless powers of persuasion to do what you want? One strategy had the best chance at success—tell her no.

Now his phone was beeping and her private number glowed on the caller ID.

“What do you mean ‘no way?’” she snapped into the phone before he’d finished the second syllable of “hello.”

Colton grinned. She was riled, all right. Score one point for him.

“Having trouble interpreting two words, Tessa? You’ve been on that island too long.”

“You haven’t even thought about it,” she insisted, and Colton imagined her stamping her foot.

“What’s to think about? The book has been fun. An interesting way to pass some time, simmer off creative juices.”

He paused after his last word, letting it linger, intending to spark that sensual awareness they shared whether she liked it or not. She’d likely fight her natural response with sarcasm, distance. Bravado. Lord, she intrigued him. And Colton took that as a very good sign.

“I never intended to make a career out of writing erotica with you,” he added.

Now a lifetime of living erotica, that he might consider—had considered—since he’d first met Tessa. Only she had sworn off men, at least those who wanted more than a hot and heavy fling. With his thirty-sixth birthday looming, he didn’t have the energy for one-night stands and meaningless liaisons anymore. The dating game no longer interested him, particularly since he hadn’t had an interesting date in months. How could he when his pool of contenders consisted of sweet, educated, ready-to-please-at-any-cost-so-long-as-there-is-a-ring-involved women?

His mother and father would have loved each and every one of them. The heir to the Granger estate in tony Richmond, Virginia had been raised to keep an eye toward finding the perfect wife. Gracious, charitable, pretty. Worthy of the centuries-old name. For a while, Colton actually had hoped he might find a woman who possessed all those qualities, and who would fire his passions and inspire his fantasies at the same time.

Tessa’s less-than-virtuous reputation wouldn’t go over well with his parents, but as much as Colton loved his family, he was too old to waylay his passions in some fallacious bid for their approval. They’d adjust.

He wanted Tessa. And to get her, he’d have to play rough.