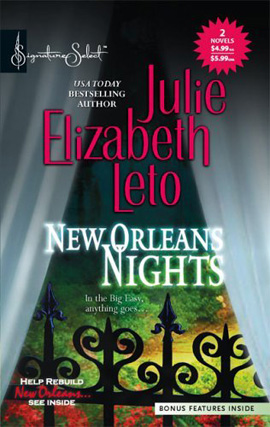 Both, PURE CHANCE as well as INSATIABLE, have been previously published as Harlequin Temptation releases.

“Pure Chance”
Desperate to get out of a bind, Serena Deveaux decides to “hire” bodyguard Brandon Chance, her high school crush, to pose as her new romantic interest. But Brandon thinks he’s protecting Serena from a stalker…who doesn’t exist! And to further complicate matters, their once adolescent yearnings have now turned into something much deeper and far more dangerous. But even as Serena worries about a relationship that’s too hot to handle, a real danger is making its move…

“Insatiable”
Rookie bodyguard Samantha Deveaux questions herself when she’s drawn to the picture of a man on a pasta sauce label, until he turns out to be Nick LaRocca himself, CEO of LaRocca Foods—and Samantha’s next client! Nick needs Sam to protect him from a group of out-of-control “pasta label” fans. Now Sam’s playing the role of Nick’s latest love interest. Problem is it doesn’t seem like such a bad idea at all!