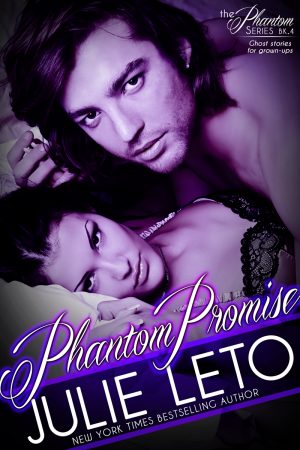 If you’ve read the Phantom series, you’ll know that Paschal Rousseau* is key to the story of the Forsyth brothers, all trapped by a sinister Gypsy curse. In the Phantom books, Paschal is an old man who has spent a lifetime tracking down the magically ensnared heroes. But he had his own romance once…his own wildly romantic story. This is it…

In the fourth book in the Phantom series, a powerful love begins with a promise…

When a Gypsy curse transformed Paxton Forsyth from man to phantom, he vowed revenge. But upon awakening from a centuries-long slumber, he finds himself confined within a chateau in war-torn France. He has one shot at freedom, if he can seduce the enchanting woman who’s ventured into his lair.

But Jeannette Rousseau is no easy target. Though orphaned and alone, she’s promised her heart to an enemy spy. Only by calling on the magic does Paxton entice her…and once their tryst is exposed, they become pitted between the consequences of a forbidden love and the forces plotting to take over the world.

A story that transcends time, Phantom Promise is both prequel and sequel to a series readers have called “captivating,” “unique,” and “surprisingly entertaining.”

**If you’d like to read a longer excerpt, you can use the “Look Inside The Book” feature at Amazon, which is available HERE. You will be able to read the Prologue and Chapters 1 – 3 and part of 4…for free! Even if you purchase through another retailer, this is a great way to sample the book!

He doesn’t deserve you.

Jeannette jumped, surprised by the intimate whisper that skimmed along the shell of her ear.

She’d heard the voice before. But where? When?

“Who’s there?” she whispered in rusty English, the language she’d learned by reading the novels of Jane Austen with her mother.

No one replied, but she heard pounding on the wall near the tunnel’s entrance.

Merde. She was so stupid! This was why her brother would not take her with him when he’d run off to join the Resistance—why he’d died without her, serving the cause. She was too young. Seventeen and too ridiculous to serve the cause in any useful way.

When would she learn?

Stay still, the voice murmured. They will not find you. I won’t let them.

She did not move. She could not think. Was there someone else trapped with her? She didn’t dare move her hands to feel around in the dark, but she sensed no one. Was it Rolf who spoke to her? Who promised to protect her? She’d read about people who could talk to each other with only their minds.

A memory niggled in the furthest reaches of her brain, but she could to seek it out—not when she was so desperately afraid.

After the longest minutes of her life, Jeannette finally heard the soldiers retreat. A deathly silence descended on Chateau d’Argent. She remained frozen in place. She hardly breathed until the sounds of night crept into her consciousness.

The scuffle and scurry of animals through the eaves.

The hoot of an owl in the trees.

The whistle of the lazy wind.

And yet, she knew to the depths of her soul that she was not alone.