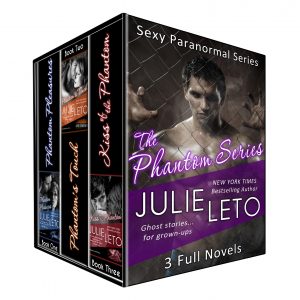 Originally published in 2008 and 2009, this series takes paranormal romance and blends it with sexy contemporary and time travel elements. My heroes are all from the past, trapped in various objects by a powerful Gypsy curse. They survive until the present, where modern-day women seek to release them into a new and unfamiliar world. But until they break the dark magic spells, they are phantoms during the day–and insatiable men at night. What’s a 21st century woman to do except fall desperately in love?

There are no vampires, werewolves or shape-shifters in this sexy paranormal series, but there is magic both light and dark, Romani tradition and cultish conspiracies. And best of all, this series is currently available for both Kindle AND Nook readers!

These are ghost stories…for grown ups!