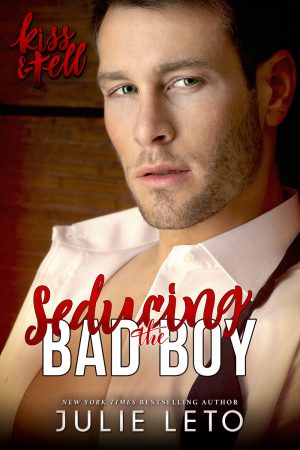 Second chances and a secret baby…with a twist!

Jack Sullivan has seduced some of the world’s most beautiful women. As a notorious, world-renowned photographer, his affairs are always hot, always scandalous—and never satisfying. So when he has a chance for a wild fling with high school sweetheart, he can’t resist. Only Angela Harris isn’t so sweet anymore. She has a secret that will rock him to his core and change his life forever. Their sultry reunion proves the bad boy can be seduced…but can he be reformed?

Angela had prepared for this moment. Ever since she and Miranda had gone to a bar to discuss how to find out who had turned her thesis into a tell-all confessional. Seeing Jack again. Meeting Jack again. Interacting with Jack again. By the third round of mojitos, the topic had shifted from the identity of the author to the root causes of her continued obsession with the boy who had once spawned her most intimate schoolgirl fantasies—and who had grown up into the devastatingly delectable man now standing directly behind her.

He’d been the class bad boy. His reputation had been well earned. Their freshman year, he’d dated at least three different senior girls. His homecoming date their sophomore year had been in college. Junior year, rumors rushed like wildfire that he’d been seen at a downtown club with a girl who’d been a contestant on The Bachelor. In a million years, no one would ever have guessed that Jack and Angela would end up together, even briefly. But he’d made her laugh and she’d given him cred. In the backseat of his Mustang, he’d introduced her to sensual pleasures, first by breaching the barrier of her bra and then, weeks later, the filmy silk of her panties.

But they’d never gone further. They hadn’t had the chance. Like so many red-blooded teenage girls before her, she’d selected prom as the night they’d go all the way. But she had not told him, not specifically, and before the DJ had called for the last dance, he’d pushed her away. Their breakup had been heart-wrenching and unexpected…and it had haunted her longer than it should have.

From that night until now, she’d wondered what would have happened if she hadn’t been so afraid to make her fantasies come true. And what if, once she’d made the decision to be with him, he hadn’t acted like a jealous ass?

A decade later, the questions remained unanswered—and circumstances were forcing her to put them to rest once and for all. She’d had one shot to put her past to rest and it was sitting in her inbox. Still tipsy after her Uber ride home, Angela had opened her email app, scrolled down to the reunion invitation and clicked Accept.

Now she was here. And he was no longer across the room, but standing only inches away, though he might as well have been flush against her since he’d occupied such a powerful part of her for far too long.

She had to squelch the fantasies, and the only way to do that was to let nature run its inevitable, chemical course.

“I can’t remember being that sweet, innocent girl,” Angela lied, not yet ready to turn and face him even though she’d spent the whole of the reunion’s kickoff cocktail party staring at him from across the room. While she acted like she’d been listening to former classmates, she’d instead watched Jack as he held court at a pub table near the door. His laugh had been measured, but his emerald eyes still glinted with a roguish edge. His square jaw softened whenever a woman stopped by to say hello, but tightened whenever he’d caught her staring.
Which was more than once.

And though it might have been hard to tell about the state of his physique while he was dressed in an expensive Italian suit, she had no trouble believing that, stripped down, he was just as hot as he’d been in high school.

Now that he was right behind her, his warm breath caressing her bare shoulder, she wondered if her scheme to soothe the increasingly constant ache she felt for him was completely insane.

But she didn’t have a choice. There was only one way to get Jack Sullivan out from under her skin.

She knew he wasn’t married. She knew he’d come to the reunion alone and nothing in his social media indicated that he was in a relationship, though he had recently gone through a high-profile break-up from one of the supermodels he’d been dating. She’d known none of this until her night out with Miranda, when her former camp counselor had impressed her with her internet stalking skills.

She could no longer remember the stretch of time after graduation when she hadn’t thought about him or romanticized their short, sweet romance. But those times were long over. For the past couple of months, he’d been increasingly a part of her life, even though he didn’t know how or why. She had to prove to herself, once and for all, that any association with the man would be bad news.

Her plan was simple—sleep with him, prove to herself how meaningless sex would be, then move on to someone who could give her the commitment she craved.

He slid his hand onto her bare shoulder and slowly, painfully turned her to face him.

“You haven’t changed that much since graduation, my sweet, innocent angel.”

He leaned in, voicing her pet name in a whisper that singed her cheek. Her lids fluttered. She could feel his hands on either side of her hips—not touching her but wanting to. Did she really want his touch again?