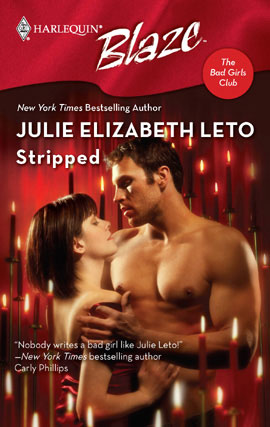 Lilith St. John is a witch—really. And she hasn’t been too good lately. It seems using her powers to make Detective Mac Mancusi totally infatuated with her was a big no-no. Who knew? After all, what woman could resist having a sexy guy like Mac aching for her every minute they were apart? But the council isn’t pleased—in fact, they’re stripping Lilith of her powers. What’s a witch to do?

Especially now—when Mac’s suddenly back in her life, looking to rekindle the magic…

Mac drummed his fingers on the kitchen counter, trying not to turn around and stare at the altar in Lilith’s living room. He kept himself occupied by downing another shot of the bourbon he’d found in her liquor cabinet. Had she really had an altar before? Had he really taken so little stock of the living area (as opposed to the sleeping area) of Lilith’s apartment that he couldn’t remember that she had a waist-high chest covered with a blue cloth and dotted by a hand-molded ceramic bowl of sea salt, matching white and black candles, incense, a blossoming stalk of celery, a pentagram and a knife he was very relieved to find had a dull blade, and because he couldn’t help but check, no obvious blood residue? Clearly, there was more to this woman than he anticipated. Other than the sex and their partnerships in the precinct, what did he really know about her?

He remembered precisely where she had her little star tattoo—a symbol he now realized meant more to her than he’d ever imagined. He remembered the exact location of her erogenous zones, all for entirely selfish reasons. Everything else he’d thought he knew about her—from her preference for thin, New York style pizza even though they lived in the land of the deep dish to her insane knowledge of seventies rock bands and science fiction cinema—had all become suspect when he’d realized she could read his thoughts. They’d had so much in common then. Before he knew the complete truth…that her knowledge was mostly his, gleaned from his mind by a power he’d never truly understand.

He started, sloshing the bottle of bourbon he held tight in his hand.

“Welcome to my world,” she quipped, grabbing the shot glass and bourbon from in front of him.

He took a deep breath, inhaling the fresh, crisp scents of toothpaste and body spritz emanating from her body. She’d loosened the buttons on her blouse and the way her hips made tiny figure eights while she poured bourbon into the glass testified to pent-up sexual energy. She’d made no secret that she wanted to seduce him or that she wanted to be seduced. Had his discovery of her altar and Josie’s theory on psychic control changed that?

Who was he kidding?

“Want to talk about your world?” he asked, hoping she’d say no. She’d run a brush through her hair, softening the spiky ends she’d worn this afternoon. His fingers itched to weave into the dark strands. She shifted as she set the bourbon on the counter, allowing him a more enticing view of the low-cut, tight tank she wore beneath her blouse.

She downed a gulp of booze in one quick swallow, arching her back as the liquor slid down her throat. “No.”

He smiled and refilled her glass. She made short work of the second shot as he poured his third. And he thought she only drank girlie wine coolers.

“Okay, yeah,” she contradicted, smacking her lips like the veteran drinker he’d thought she wasn’t. “But we’re still going to have sex, right?”

Mac’s laughter belief his true intentions. Despite the alcohol, his muscles tightened. Across his chest. Around his neck. Down his back. Below the belt.

He cleared his throat to keep from choking. “That’s the plan.”

She waved her hand dismissively. “It was off the cuff. As much as you think you’re all ‘go with the gut’ now, you’re really more of a step-by-step kind of guy—and there’s totally nothing wrong with that. We just need more time to…strategize.”

She glanced at him seductively and staring into her emerald green eyes, he almost forgot what they were talking about. When she slipped the filmy blouse off her shoulders, allowing the gauzy material to flutter to the floor, he nearly forgot his name.

“Yes, we. You dragged me into this. Besides, without my powers, I have nothing else to do but work for the greater good of all Chicago. Pogo Goins knows something and Boothe Thompson is a snake. And frankly, I wouldn’t mind getting a piece of taking them down.”

God, he loved how her mind worked. He loved how she talked, the way her voice dropped to sexy, dulcet tones when she simmered with anger. Despite her protestations earlier, Mac knew Lilith would make a great cop. Sure, she’d spend a good deal of her time getting to know the guys at Internal Affairs or on suspension for breaking one rule or another, but when on duty, she’d make even the pettiest crime interesting.

“We may have lost our chance,” Mac decided. “Maybe I should just take a break and let the guys who still have badges handle this one. It’s not like I’ve got a secret weapon or anything.”

She crinkled her nose. “Is that a swipe?”

He winced, remember what she’d said about losing her powers. And more than that, how she’d said it. As if her heart had been ripped out, too.

“Yes,” she agreed, pouring herself another shot of bourbon, but this time disposing of the alcohol in several relatively dainty sips.

Lilith glanced over at her living room. Mac had been staring in that direction long enough to know she was looking at her altar. Maybe he shouldn’t have asked.

“Let’s just say that powers like mine don’t go unchecked. If that were the case, you’d have a lot of psychics running the world, wouldn’t you?”

He’d never really considered that possibility. Before Lilith, he’d never even believed true psychics existed. Wasn’t easy to wrap his mind around the idea that she had to deal with psychic police. Question was, how much of her weird world spilled into his on a daily basis? Not many criminals were psychic or they wouldn’t get caught. Not many cops, either, or the whole force would be sitting pretty with bulging jails and little to do except play poker across the squad room table.

“Clairvoyants running the word would be bad.” He decided to agree with her, not knowing what else to say or what was safe to ask. Not because she wouldn’t answer, but because he knew she would.

“Well, that depends entirely on your point of view,” she said with a laugh that quickly dispersed when she got back to the subject. “Anyway, the people who regulate this sort of thing decided I needed a break from my abilities. I wasn’t exactly holding hard and fast to all the rules.”

“You?” he asked, exaggerating shock.

She sneered, though she managed to make the ugly expression adorable. “Yeah, yeah. Big shocker. I turned my talent into a business and that didn’t sit well with the…powers that be. That’s why the only help I can give you on this case is the normal, back-up, supportive, you-go-get-‘em Mac kind.

Mac licked his lips, enjoying the flavor of the bourbon on his skin and wanting more than anything to taste it on hers. “That’s not exactly true.”

Clearly, she noticed the sensual intentions buried beneath his words. And happily, she didn’t seem to mind the innuendo.

He slid the bottle away. “You’re lying.”

She stood up straight, her shoulders squared and her hands ready to wrap into tight fists. “Excuse me?”

“I just meant,” he said, taking her hands in his and working out the tension with his fingers, “that whether you mean to or not, you’re continually making me feel things I don’t want to feel. Every minute we’re together, you make me do things I don’t want to do. We’re so different, Lilith. I’m only realizing now how far apart our worlds are. And yet, here I am, wanting you, not for just an hour or a night, but for—”

Her gasp silenced him.

His kiss squelched the sounds that followed.

As he’d fantasized, her mouth tasted like peppermint and smooth, Kentucky whiskey, served in a warm glass. Her skin, so soft beneath his touch at first, prickled as a shiver danced through her body. He pressed her close, her body flush against his. He longed to strip her bare, expose her, raw and willing, to his hungry eyes.

Before he could tear off her tank top, she pressed her hands flush against his chest and backed away.

“What?” he asked, the word tearing from his throat as if formed with jagged glass.

She reached out and ran her finger across his lips, slipping the tip inside for a split second to tease his tongue. “I made big mistakes with you before, Mac.”

He shook his head to clear the lusty fog clouding his ability to process her words.

“Yeah, you kept shit from me. I reacted badly. Apologized. It’s over.”

He reached out for her, but she dodged his grab.

“That’s not what I meant.” Her voice was husky, deep and hot. She sashayed a few steps away from him, her hips undulating in a dance he couldn’t help but follow. “I wanted you so desperately the first time we met, I changed who I was to please you, at least in the bedroom. I broke into your thoughts and stole your sexual fantasies, then made them reality.”

His mouth dried as the memories swamped him. He swallowed, attempting to replenish the moisture. When it didn’t work, he grabbed the bourbon and took a swig without the glass. He wiped his mouth with the back of his hand. “And the bad part of that was?”

She quirked an eyebrow, then slowly turned and strolled into the living room. His ears thrummed with the deep bass sounds of his heartbeat, suddenly in time with music about witchy women and their magical hold over their men.

Only she wasn’t in possession of her powers anymore, was she? This was all her. Real and unafraid to tempt him with the rock and roll of her sweetly curved backside and coy glances over her shoulder to see if he followed.

He marched into the room just as she draped herself across the couch.

“The bad part was,” she said, kicking off her sparkly sandals, “I never got any of my fantasies fulfilled.”

Her mouth quirked into a half grin, erasing any chastisement from her tone. The past was the past. They’d both made mistakes. If Mac had thought for one minute about wanting to fulfill Lilith’s fantasies, she would have read that in his mind and made sure it came to pass. Instead, he’d been having too much fun indulging his own preferences. He’d ignored hers.

He whipped his shirt over his head. “That’s criminal.”

She grinned, then curved her lips into an enticing pout. “That’s what I thought. What exactly do you think is justified punishment?”