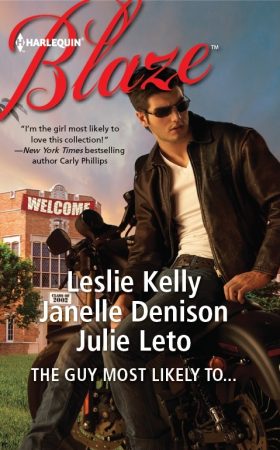 The Guy Most Likely To…

Ever wonder what happened to the guy most likely to…

Ride out of town on a Harley?

Rebel Scott “Rip” Ripley always had a thing for the elusive Erica Holt. But reunion night holds a few sexy surprises when Erica decides it’s time to take the bad boy for a ride.

For more information about the connected stories by Leslie Kelly and Janelle Denison, visit their websites!

Scott Ripley tugged his duffel out of his saddle bag, grunting at the weight. He should have left some of his crap at his aunt and uncle’s house where he’d stopped right after hitting town, but as he’d shown up in the middle of their bridge club, he’d opted to keep his visit short.

He had, however, promised to return for Sunday dinner. The prospect yanked a reluctant smile out of him. For years, he’d hated everything about his teen years—including the family that had taken him in after his father’s arrest and his mother’s overdose. He’d certainly made himself the bane of his aunt and uncle’s existence, though he always stopped short of anything too serious—just enough to make him a serious pain in the ass and cost his uncle a fortune.

The man had spent hundreds—no, thousands—paying off business owners and school officials so that Rip’s infractions didn’t permanently scar his future. Now he was back in town with his proverbial hat in his hand, not to collect cover-up money, but to find funding for his foundation’s newest program. He wasn’t about to ask his uncle for a dime, but his wealthy classmates were another story.

In retrospect, high school hadn’t been a total waste of time. He’d learned some things, made some friends. He hadn’t been anxious to attend his reunion, but he’d make the best of it—a prospect that brightened when he heard the rumble of a well-made American hog coming up behind him.

So far, his was the only bike parted in the motorcycle lot of the Celebrations Resort. The closer the Harley got, the louder his blood pounded in his ears. For those formative teenage years, hopping on to the back of his ride and tearing through the neighborhoods of suburban Chicago on his way to meaner, more familiar streets had been the only thing that had saved his sanity. He loved the machines with a passion that skirted perilously close to obsession.

The hungry growl of the approaching Twin Cam 103™ engine was only foreplay. When he caught sight of the rider—a wet dream from the cut of her boots to the curves of her body—his prospects for the weekend ratcheted up to fantasy fulfillment.

She rolled to a stop in front of him, but didn’t power down.

The undeniably sultry, unmistakably feminine voice was barely audible over the engine, but even with her face shield down on her helmet, he knew she was hot. Clue one? Glossy red lips. Clue two? Flawless skin on her jaw, neck and cleavage. Clue three? The confident way she sat her Harley-Davidson Softail Deluxe.

“Do I know you?” he asked, lowering his sunglasses.

“Not as well as you should,” she replied, turning her helmeted head toward the tight space behind her. “But if you get on, you can change that.”

He put his glasses back on. Things like this didn’t happen to him every day—but he couldn’t say it hadn’t happened before. But this wasn’t the Greased Handlebar out in Bakersfield or Sam’s Slaughterhouse on the South Side. This was a five-star resort and this woman, despite the leather and denim gift-wrap, was no ordinary back warmer.

At first glance, she looked entirely suited for the sleek machine between her legs. Her denim jeans were ripped at strategic intervals just beneath her knee and at mid thigh. Her leather vest clung to curves that filled the supple hide with just the right amount of feminine flesh. And her boots—black-heeled and scuffed—could kick a man squarely in his family jewels the second he got out of line.

“As enticing as your offer is, I don’t ride with bikers I don’t know,” he replied.

Rip narrowed his gaze, wondering who this vixen could possibly be. In the ten years since he’d fulfilled his classmates’ senior superlative by being the guy “Most Likely to Drive Out of Town on a Harley”—an award they’d created just for him when a drug-dealing classmate had beat him to “Mostly Likely to Spend Time in Prison”—he’d never once imagined that any of the debutantes from St. Aloysius Academy would use their trust funds to buy a hog.

But people changed. If this chick knew him—and he was certain she did—somewhere underneath the tanned and dyed cowhide of her vest and ripped up jeans was a prep school sweetheart in new, improved packaging.

The question was, which one?

“What are you afraid of?” she asked, curling her hands and revving her engines, making it harder to ignore her challenge—or identify her voice.

“The only thing I’m afraid of is you mishandling that machine,” he replied.

Her crimson lips curled into a cocky grin. “Trust me, Rip. I can handle a hell of a lot more than you can imagine.”

Rip stuffed his duffel back into the saddle bag and locked his bike.

As he strapped on his helmet, she wiggled a little further up the leather seat, drawing his eyes to her sweet little backside. He tried to imagine the curve of her ass in the pleated plaid of St. Aloysius Academy’s school uniform, but why go back to the past when the present was so much better? Though he’d spent a good portion of his school days concentrating on the sassy swing of his schoolmates’ backsides rather than his books, he hadn’t memorized them. Like the elements on the periodic table, there were just too many to remember. But this one felt pert and tight against his inner thighs and her waist barely required one arm to wrap around.

“Where’re we going?” he asked as she eased the bike around a curve that led to the parking lot exit.

“Old haunt,” she shouted before the fully-throttled engine drowned out any possibility for further conversation.
She navigated the streets with ease, merging onto the highway without hesitation or fear, passing cars when she needed to, but never remaining well within the speed limits and road rules. A beautiful woman who could tame a Harley was a woman to be admired. Well, he had to assume she was beautiful. Her body was certainly smoking. Coupled with gorgeous lips and luscious dark hair that teased his face like feathers, he imagined this woman was a heartbreaker.

Or had she had her heart broken? By him?

Twenty minutes later, they exited into a familiar neighborhood. The trees were a little taller and thicker and the roads had been repaved, but the stately brick mansions and estates that flanked St. Aloysius Academy were too arrogant and ostentatious to be forgotten.

She slowed down before she jumped a curb and motored down an unpaved drive that ran parallel to the school’s six foot stone wall. He hadn’t been back to the scene of his many crimes since graduation and he certainly never expected to return with an anonymous classmate with unclear intentions.
Though as far as intentions went, the mysterious kind were often the most interesting.

Now that the engine no longer roared in his ears, he heard a familiar cadence in her voice. Oh, yeah. He knew her. He knew a lot of girls back in high school, both casually and biblically—usually both. And yet, somehow, he didn’t think she was one of his many conquests. Something about the confident way she engaged the kick-stand and slid off the leather seat told him she was more of a mystery than a blast from his past.

He hopped off and stared down the dirt path. The access drive at St. Aloysius Academy, barely wide enough to accommodate the golf cart he’d regularly appropriate from the ground’s staff, had been the scene of quite a few memories, both good and bad.

“I couldn’t get out of this place fast enough,” he confessed.

She laughed. “I remember that about you.”

She unhooked her helmet, but didn’t remove it.

“Wish I could say what I remember about you.”

“Maybe you won’t remember me at all,” she said, but he could hear the tease in her voice.

While he dug deep into his memory to place the familiar sound, she grabbed a low branch and pulled herself up onto the stone wall in three easy moves. She straddled the wall while he wrestled with a suspicion that couldn’t possibly be true.

Rip grabbed the branch and propelled himself onto the fence beside her. He mimicked her position, scooting forward so that his jeans scraped against the rough texture in a not-unpleasant way. When their knees touched, she pulled off her helmet and let it drop to the loamy ground.

A curtain of dark hair cascaded past her shoulders. She combed her fingers through her slick locks, then faced him, looking at once mussed and perfect.

He tried to reply, but barely managed a nod. She further sealed his silence by grabbing his cheeks and tugging his face to hers so that their lips were less than an inch apart.

“Then prepare for the unexpected.”

Of all the girls he’d gone to school with, of all the women he’d enjoyed since he’d ridden out of town, he’d never in a million years expected to be face to face—or lips to lips—with the girl most likely to turn his ass down.