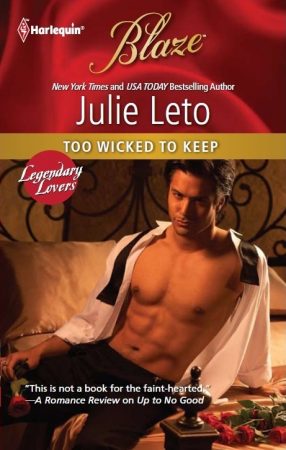 Too Wicked to Keep

Thief Danny Burnett wonders if the antique ring in his possession–once owned by a legendary masked bandit–is as powerful as his brothers claim. It’s supposed to help a bad boy change his wicked ways, so when heiress Abby Albertini unexpectedly steps back into his life and makes him an offer he can’t refuse, Danny has a chance to find out if the legend is true.

Abby needs Danny to retrieve the scandalous painting he stole from her five years ago, along with her heart. No longer naïve or innocent, Abby has a few naughty tricks up her sleeve to ensure he uses his talents for good this time. In the process, she’ll teach him a lesson about payback that he won’t soon forget–one hot, wicked night at a time!

“If you need something slick to rub on there, I think I have something.”

Daniel Burnett stopped tugging at the ring caught on his knuckle. He must have looked like a moron, sitting in a New Orleans casino, tugging at his finger as if the gold band was cutting off his circulation. He couldn’t imagine why any woman would proposition him under these circumstances, especially since he probably looked like a schmoe trying to hide the evidence of his marital status.

But when he looked up at the woman behind the sultry proposition, he nearly slid right off the bar stool.

Everything about her was different. Her hair, once a straight, unadorned brown, now glimmered with striking copper highlights. Amber eyes once muted behind square-shaped red-framed glasses now flashed from the center of long, dark lashes. Lips she’d once coated only with balm or a pale gloss were now outlined and plump with a rich cognac shade that made him crave a burning, fortifying sip.

She arched a brow. “Wow, and here I thought you wouldn’t recognize me after all these years.”

The words were out before he could stop them, before he could put a lid on the Pandora’s box of emotions flying through him. He never thought he’d see her again—never wanted to. He’d avoided taking any jobs in Chicago—hell, he avoided the whole Midwest all together. He’d survived Abby once, but barely. A woman like her was lethal.

He grabbed his jacket from the back of his chair and shrugged into it. He eyed the door. His flight wasn’t leaving for another six hours, but maybe he’d be smart to leave for the airport now. Maybe he’d rent a car and drive back to California.

Or maybe he’d just crawl under a rock.

She leaned in close so that her breath, sweet with mint, caressed the skin on his neck and ear. “Come on, Daniel. After all these years, you’re not going to at least tell me how beautiful I look?”

This was the advantage of meeting up again with a woman who already knew you were an asshole. He could look his fill and she wouldn’t think any less of him—it wasn’t possible. She took a step back, hooked one hand onto her slim waist and waited while he drank in the whole delectable picture.

He deserved this. The torture of dragging his gaze up her long, tanned legs, cut at his core. Her curved hips, trim waist and slim belly taunted him so that he nearly squeezed his eyes shut once before he reached her sweet, round breasts. But as much as he wanted to look away, he couldn’t.

The flavor of her skin danced on the memory of his tongue. The sound of her pleasured moans echoed through his dreams. The feel of her lips lingering on every intimate part of him was like a chained ghost, haunting him with the sins of his past.

Danny had done his first good deed in his life couldn’t be denied. He glanced at the stupid ring his brother had shoved onto his finger less than an hour ago, as a reward for Danny’s help in rescuing Michael’s lover from a crazed rapist. His younger brother had spouted some nonsense about how the two hundred year old heirloom would change his life, but Danny hadn’t believed word.

He tried not to groan as she twisted sideways so that the full impact of her curves hit him like a battering ram.

He reached for his drink.

“Marriage agrees with you,” he muttered.

The edge of her mouth quirked at the corner. “Thank you.”

As much as he didn’t want to look, Danny made a quick survey of the bar. He’d never met Marshall Chamberlain, so he just looked for any man with whose veins were popping out of the side of his skull. That’s what he’d look like if the guy who’d tempted his fiancé to cheat on him had suddenly appeared in their vicinity. But none of the guys lingering nursing their beers or strolling through the casino looked the least bit interested in him or Abby.

Danny clucked his tongue. The guy really was a moron. If he had a wife as passionate, beautiful and barely-reined as Abby, he’d never let her out of his sight.

Of course, he didn’t have a wife like Abby and that was no one’s fault but his own.