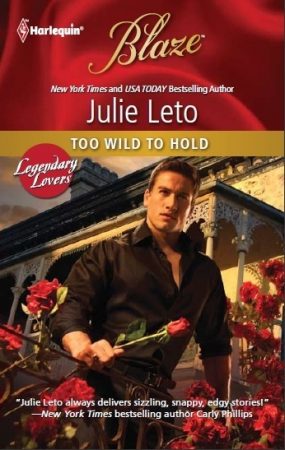 Too Wild To Hold

HOT NIGHTS IN THE BIG CITY

In the sultry heat of New Orleans, a masked man stalks his next prey…private investigator Claire Lécuyer. In order to protect her, FBI agent Michael Murrieta—the descendant of a real masked legend—must go undercover at her hiding place…a sensual retreat, where decadence and sin beckon from every room.

Once immersed in this world of pleasure, Claire and Michael find themselves teased by the languidly sexual environment—and their blazing attraction to each other. But even as they “mask” their true identities, it’s too late.

Now Claire and Michael are caught up in the danger…and their desire. And the longer they stay in the sensuous world, the more dangerous it is!

With the whispered threat came the clamp of man’s gloved hand onto the back of Claire Lécuyer’s neck. She commanded herself not to flinch or alter her features, which she’d schooled into relaxed amusement. She’d entered this crowded ballroom of her own free will and she meant to leave that way, even if she had to take a madman with her.

She moved to turn, but he tightened his grasp.

He didn’t know the half of it.

Despite the rush of adrenaline pumping through her veins, Claire willed her voice to remain light and lilting, in keeping with the character she’d created. For tonight, she wasn’t just a former cop turned private investigator searching for a missing person—she was, in this undercover incarnation, a sweet Southern belle searching for lover among the throng.

“But the night has just begun,” she said. “Who yet knows who is going to end up with whom?”

Two hundred years had passed since the first Quadroon ball, but two weeks ago, Claire had learned that the traditions of old New Orleans had been reintroduced to modern Louisiana by sexual fetishists who called themselves Nouvelle Placage. Leasing the use of a plantation over an hour away from the French Quarter, the group recreated the grand ballrooms and strict rules of a system that had once been the means by which rich white landowners arranged for long-term affairs with women of the gens de couleur libre, a light-skinned French Creole class native to the pre-Americanized New Orleans.

But these people weren’t re-enactors like the ones who showed up at Chalmette National Park every January to recreate the Battle of New Orleans. These modern men paid outrageous entry fees for women who would fulfill their every fantasy. They came from across the country to enjoy a weekend of anonymous sexual encounters dressed up with proper manners, old-world moral codes and romanticized dominance and submission.

In the past, the young ladies demanded homes, generous allowances, finest clothes and educations for their bastard children from the men they took as lovers. In this modern revival, the compensation was a hell of lot more complicated. And the affairs only lasted for a weekend—which meant Claire had only that long to complete her case and find Josslyn Granger.

Technically, Josslyn wasn’t missing, though for four years, her whereabouts had been unknown. According to her former husband, she’d announced her defection from suburban soccer mom to sexual deviant, filed for divorce and disappeared. But though she’d granted her perplexed husband papers to dissolve their marriage, she’d conveniently forgotten to give up parental rights for their two children.

Since then, Robert Granger had hired a dozen private investigators to search for his wayward ex-wife as she followed various sex partners and sex clubs around the country, but none had succeeded in pinning her down. When the husband heard she’d be in New Orleans for the Nouvelle Placage event, he’d hired Claire. Now remarried, her client’s job required frequent overseas travel and his new wife, for both legal and emotional reasons, needed to adopt Josslyn’s kids. But that to happen, Claire had to find Josslyn and convince her to sign the papers she’d hidden nearby.

The case was a welcome diversion from her usual background checks and cheating spouse investigations. She liked succeeded where others had failed. She adored undercover work and relished a chance to test her own limits.

What she didn’t like so much was being manhandled by some guy who may or may not be the stalker the FBI had warned her about.

“You will end up with me,” he said, his voice a low, but confident promise.

She forced a girlish giggle. If he was the stalker, maybe a different persona would throw him off. He hadn’t come here expecting to find a pliant, vapid ingénue on the prowl for a man. He’d expected Claire Lécuyer—who was, in all ways, the complete opposite.

“Is that so?” she asked, her tone seemingly unconcerned. “But you have not yet negotiated my willingness to end up with you. Have you not been schooled in the ways of Nouvelle Placage?”

Around them, men in impeccable top coats and breeches circled the room, calculating and assessing their more-than-willing prey. From behind painted fans, women in decadent, empire-waist gowns flirted and fawned, hot with anticipation for a lover who’d soon devour her with unbridled desire and deep, deep pockets.

If not for the strains of a lively quadrille and the overpowering scent of candle wax, a stranger might mistake the scene for a modern-day masquerade. But this place was more than costumes and characters—this was the gilded antechamber into the dark and dangerous world. Claire has busted her ass to get in to this guarded community and she sure as hell wasn’t going to let some mystery man derail her, no matter who he was. Maybe he was just an attendee who’d missed orientation. Or maybe he was the stalker the FBI had warned her about.

Didn’t matter either way. She wasn’t dealing with her own problems until she completed her case.

“Perhaps I should call Monsieur Masterson to remind you of how things are done here?” she suggested, invoking the obviously fake name of the man who seemed to be in charge, but who, unfortunately, was no where in sight.

“I know all the rules, Ms. Lécuyer,” the mystery man assured her. “But like you, I believe that some rules are made to be broken.”

She pretended to laugh, hoping the vibrations would help her shake off her fear. “Your overconfidence does you no credit, sir. But if you are so intent on having me, perhaps you should begin by telling me who you—”

He cut off her inquiry by tightening his grip.

“You thought you’d be safe here, didn’t you?” While one hand held her immobile, the other trailed up the back of her gown, brushing the beribboned stays with exquisite slowness, as if he savored a chance to untie each and every one. “You thought you could protect yourself.”

Unexpectedly, his breath was tinged with the sweet scent of mint and creamy café au lait.

“You haven’t yet proven otherwise, sir,” she whispered.

Swallowing her fear, she’d pushed out her reply with bold confidence that was only half-sincere. She didn’t know very much about the man who was after her. The local FBI agents had only told her to go someplace safe and wait for contact by the lead agent who was on his way from California. As she only had the weekend to find Josslyn Granger among the attendees of Nouvelle Placage, she’d figured it was as safe a place as any other.

She’d had to call in quite a few favors from her days at Vice to even get in here. She’d had to pay the dues, buy the clothes, endure the orientation, all in her bid to find a woman she knew was here somewhere, but who’d yet to show. She hadn’t imagined some wacked-out sicko who’d last been spotted in California would go to so much trouble to follow her.

But maybe she was wrong.

She moved her head just enough to catch a glimpse of her captor. His startling blue eyes widened, then narrowed before he tugged her back into place.

She snorted. He wasn’t the first man to utter those words to her. And he probably wouldn’t be the last.

“It’s one of my unique charms, I assure you.”

His chuckle was low, but genuine, and soothed her anxiety rather than increased it.

He smoothed his gloved fingers around her throat and pressed gently against her carotid artery.

Why hadn’t she listened more carefully to the local feds? The details she retained were sketchy. A special task force had put her name on a short list of likely victims of some creep who kidnapped women. He used the date-rape drug, Rohypnol. He incapacitated them long enough to act out some freakish seduction where he wore a mask and cape. Buried under by her own preparations for her case, she’d hardly given their warnings a second thought.

But then, yesterday afternoon, a black silk scarf embroidered with a scarlet letter Z had been delivered to her doorstep. She’d immediately brought it to the FBI, but refused their offer of protection and instead went ahead with her time-sensitive plans.

Which might, she admitted to herself now, had been a mistake.