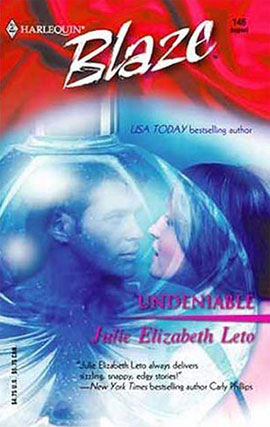 After years of making every possible wrong choice, Danielle Stone is taking control of her life. And choosing a new lover is the perfect way to start-especially when that lover looks like gorgeous Nick Vaux. Tall, dark and oh-so-sexy, Nick has a way of seeing into her very soul. The connection between them is so strong, Danielle would swear they’ve been lovers before. And they have…

Nicholai Vaux has been waiting a century to have Danielle in his arms again. In another lifetime, he and Danielle were husband and wife, sharing a love beyond measure—and it seems, beyond time. Now, Nick is desperate to reunite with the woman he knows is his true soulmate. But first he has to convince Danielle-before the past catches up with both of them…

The hinges of the case resisted, but made no sounds of protest. Her breath caught as the light from the solitary lamp beside her slid over an antique perfume bottle, nestled in scarlet silk, unlike anything she’d ever seen.

Had Armand spoken? Had it been his voice she heard? So entranced by the glittering cut crystal and intricately woven silver in the obviously ancient glass, Danielle couldn’t be sure. And she didn’t care. Her hands gravitated toward the bottle, her palms aching to feel the beautiful artifact in her hands.

She pressed the orange button on her handset, switching the phone to speaker mode, then set it on the couch beside her. She held her breath up until the moment she finally cradled the bottle in her palm. A sizzle of warmth snaked through her fingers, around her wrists and up her arms. But the sensation didn’t make her want to drop the bottle—just the opposite. She held it tighter, cupping it between both hands.

Danielle tried to come up with words to describe the beauty, but she was at a loss. “It’s not like anything I’ve ever seen. Ever touched.”

A sudden wave of dizziness struck her, likely because she kept forgetting to breathe. She turned toward the lamp, gasping when the crystal facets seized the light and threw a rainbow of colors over her skin.

“Describe it to me,” Armand requested.

Her former lover’s voice sounded so strange through the speakerphone, so she leaned closer, to make sure he could hear.

“It’s a perfume bottle, but it must be a hundred years old, maybe more.”

She turned the crystal, carefully examining it from all angles and sides, softly cradling the delicate beauty. Why had Nick given her a gift so precious, so obviously expensive? So clearly enhanced by a life all its own?

The voice was clear, crisp, female, but the sound had come from someplace in her head. She knew her own voice, and this wasn’t it. Like the disembodied sound she’d heard at Nick’s workshop, the voice echoed with a command she didn’t dare obey.

Quickly, she put the bottle back in the box and scooted it to the center of the table. She climbed completely onto the couch, nearly scrambling into the corner furthest away from the strange gift.

Distance didn’t help. In one overwhelming wave, her body nearly drowned in a sudden current of desire. Moisture disappeared from her mouth as blood rushed to every separate zone of her body. Her fingers tingled. Her nipples chafed against the lace of her bra. Every sexual impulse, every blast of lust she’d contained since her return to the States assaulted her. Images and memories flew through her mind, but with such speed that she couldn’t identify a single one.

“Are you all right?”

She fought to find words to describe the feeling, but she couldn’t meld the sensations into anything solid. She inhaled, exhaled, the repeated the process. She’d learned the techniques in rehab, simple breathing exercises to help her when her cravings threatened to push her over the edge. But this wasn’t an insatiable desire for drugs. This was about sex. Hot, sweaty, lusty sex.

That in itself confused her. Danielle never craved sex, not even when involved with Armand. Yeah, she’d had sex plenty of times before she’d met him, back when she’d been drugged out. But the two activities, sex and drugs, had never truly competed for priority. To Danielle, the drugs always came first.

Even after she’d cleaned up her act and had taken up with Armand, he had always been the aggressor, the seducer. She responded, but never initiated. Though she no longer adhered to the negative associations between sex and control, desire never seemed to enter her brain until Armand coaxed her sensual instincts to the surface.

With him, sex soothed and healed. Often, it simply passed the time—but always with delight and anticipation. Never with the overwhelming, maddening, physically paralyzing need she was experiencing now.

“Armand, talk to me,” she said, certain the rush would pass if she simply changed the subject.

“I don’t want to talk about that.”

“I don’t remember giving you a choice of topics. He gave you a gift that obviously has excited you, more than it should. What does it feel like?”

To no other man could she admit this. “Like a thousand hot fingertips running over my body. It’s not natural.”

“We’re talking about your body. Of course it’s natural. What is it doing to you, those thousand hot fingertips?”

“Why? Are they touching you where you want them to?”

No! She realized then that the sensation was not centered on her breasts or between her legs and that when she tried to identify where she felt the invisible hands, the response faded. Was she crazy? She looked at her hands. Had he placed some psychedelic drug on the box, on the bottle itself?

She knew hallucinogens first hand. This wasn’t the same feeling. Despite the quick flash of memories, her brain was clear. Only her body seemed to have a mind and will of its own.

“Run your hand along your neck, behind your hair. Are you hot?”

She did as he requested. They’d done this before, exploring sexual fantasies over the phone lines, but never had the virtual lovemaking centered around the effects another man had on her. But Danielle didn’t second-guess the situation. She trusted Armand, and maybe working off some sexual energy would dull the odd effects she was experiencing.