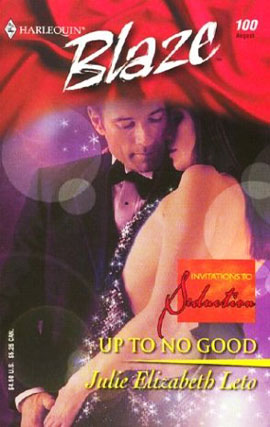 Up to No Good

She needs to escape into fantasy.

He needs to learn to lose control.

After years on the streets as a runaway, Micki Carmichael suddenly has more than she ever wanted. She’s saved her best friend’s life, reconnected with her twin sister, and is now the proud owner of Sexcapades, a book of naughty, sexy invitations for lovers. Better still, she also has gorgeous multimillionaire Sebastian Stone all to herself for seven days. He’s offering to make all her dreams come true—and from the look in his eyes, it’s the X-rated ones he’s talking about….

Once sure of their continued privacy, Bas settled in beside her, smiling when she slid the tray onto her lap, then crossed her legs over his. Her toenails sparkled bright crimson on surprisingly pale, delicate feet.

“What do you want to try first?” she asked.

Bas looked over the tray and nodded toward a fig.

She lifted it, eyeing it with her standard wariness. “Isn’t this just some funky garnish?”

“A garnish? I suppose it could be used as one. But it’s a fig. Have you ever had one?”

Her lips twisted in a grimace while she twirled the brownish purple skinned fruit in her hand. “Not unless it was inside a Newton.”

Bas laughed. Fig Newtons had been a favorite cookie in his childhood, but the real fruit, freshly picked from a homegrown vine in Italy, bore little resemblance to the filling in the store-bought treat. In taste, texture or color.

Just as he suspected of Michaela, the outside of the fruit was tough, misleading. But the inside…his mouth watered before he’d taken one bite.

Besides, a fig was an inherently sensual fruit. The fact that Michaela would taste her first at his hand thrilled him.

“Ah, well. There is no comparison. Poets have written odes to this sweet little morsel.”

She pulled the brown fig closer, eyeing it from all sides.

“This? The stuff of poetry?” she asked, doubtful. “Pomegranates must have been out of season.”

Bas was impressed, knowing that while Michaela was by her own admission under-educated, she didn’t by any means lack intelligence or wit. He, on the other hand, tipped the scales in terms of formal schooling—and yet if they were let loose separately in a room full of diplomats, world leaders and celebrities, he had no doubt who would be more popular.

Maybe that was why he wanted to feed her the fig, why he wanted to take her to New Orleans or some other charming city where he could watch her eyes soak in the sights, listen to her insight, gauge her reactions. She’d been around the block, and yet so much remained new to her. He couldn’t imagine how long ago he’d lost the true wonder for life.

Likely, sometime back in college. And try as he might, even when he closed his eyes and concentrated, he couldn’t remember as much as a full phrase of the poem he’d memorized in college about figs. Seemed a million years ago. He’d mainly studied macroeconomics and business theory, but he had taken a few literature classes to support his minor in Humanities. He’d always possessed a hunger to broaden his knowledge base. Besides, Lit classes had allowed him ample time to check out the bevy of female co-eds with insatiable tastes for randy poets like D.H. Lawrence.

“Open it,” he suggested.

She glanced around, but he hadn’t supplied a knife. Bas took the fruit and tenderly tore it in half, preserving the natural pear shape. The brownish purple skin opened to reveal a fleshy center in a rainbow of pinks, from the lightest shade, nearly white, lining the outer rim, to the bright magenta deep in the core.

But what Bas turned to show Michaela was not just the colors, but the shapes, the textures. “See this deep slit slicing down the center? The folds of sweet flesh teasing from the sides? Look how moist it is. How wet. The juices glisten, promising a delicate flavor unlike any other.”

Michaela looked as he instructed, and only a few seconds later, she made the symbolic connection.

“Are you trying to be subtle?” she asked.

“Would you rather me be crude?”

She snagged her bottom lip, thought, then held out her palm to accept her half of the fruit. “I’ve had too much crude in my life. I’ll take subtle, thanks.”

He smiled. “Not too subtle, I hope. I wouldn’t want us to suffer from any misunderstandings.”

Her stare captured his, level and steady. “Good point. How about we try a little bit of both?”

“Starting with the fig?”

Her grin, a lesson in subtlety itself, was prelude to a soft shimmy of her bottom against the seat. “Why not? Is there a right way to eat this or is this one of those ‘just enjoy’ situations again?”

Bas forced a serious expression. “Oh, no. There is definitely a nuance to the eating of a fig. Some people ravish the fruit, devour the flesh and the juices in one ravenous bite.”

“Fools,” she commented, her voice a whisper.

“I agree.” Bas drew the fruit to his lips, took a sweet, tentative lick over the soft pink flesh. “I prefer to savor the experience. Take a brief taste first, allow the flavors to mingle on my tongue.”

She mimicked his action, licking the inside, her tongue stiff, sure. Her eyes dark and desirous. Her lips lustrous with the moisture from the fruit. She hummed her pleasure and instantly, Bas’s cock hardened. God, making love to this woman would be either his greatest adventure or his greatest failure.

And Sebastian Stone didn’t fail. Ever.