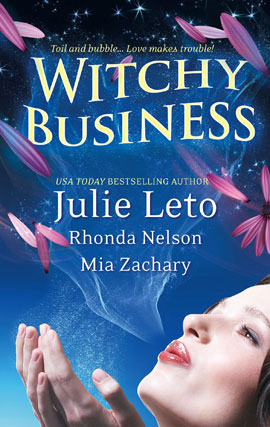 Welcome to the Sedona Rehab Center for the Magically Challenged…

CASEFILE # 1: “Under His Spell” by Julie Leto
Regina St. Lyon’s powers have been waning. Maybe she did betray love, but what else could a duped girl do? At the time, banishing hotter-than-thou Brock Aegis to the Middle Realm seemed like a good idea. But now Brock is back…and so is his former boss. To defeat the powerful witch hunter, Brock and Regina have to join forces—and risk their hearts for another shot at a real and lasting love.

Filling her lungs with the smoldering night air, Regina St. Lyon closed her eyes tightly and chanted. After one verse, she tripped over the words. She cursed, struggling to remember the phrases in the right order, to speak the forbidden language of her Wiccan ancestors with the right inflections. She took another deep breath and nearly choked on the mixed scents of charred herbs, burnt grass, singed skin and blood. The blood of her beloved.

“Regina, don’t do this,” Brock demanded. He’d dropped to his knees, pain evident in each syllable he uttered. His face, once so devastatingly handsome, now was simply devastated.

Regina’s palm still simmered from the magical burst of energy she’d used to defend herself. He’d betrayed her. And if she didn’t recite the forbidden curse now to banish him to the middle realm, he’d destroy her entire race.

She squeezed her eyelids tighter, blocking out the sight of the man she’d once loved, holding back the rush of tears threatening to burst through. She hadn’t asked to be chosen as Guardian of Witches, but the responsibilities had been bred into her from birth. She hadn’t asked for her mother to die, forcing the Council to coronate Regina as Guardian when she was only sixteen. She certainly hadn’t asked for Brock Aegis to sneak into her life ten years later, posing as a male witch seeking help from the Registry of Witches so he could seduce her and then to turn on her like the Hunter he was. She hadn’t asked for this heartbreak, but now, as always, she had to stand strong.

She had to destroy him before he destroyed her.

She chanted again and again until the intonations spilled off her lips like the rush of a swift river. She opened her eyes, calm as she surrounded herself with the power of her ancestors. Her mother. Her grandmother. Her great-grandmother and great-great aunt—all women of the St. Lyon line charged with the protection of the witching world, from the non-magical mundanes who followed the tenets of Wicca to the magical sacreds who, like her, possessed powers at odds with the laws of physics and nature.

As the magic stirred, Brock tried to stand. The ground around him shook. Cracked. Still, he straightened and balanced his body, squared his shoulders and locked his eyes on her, his mouth dropping open when he realized what she had done.

She’d opened the portal to the Middle Realm.

“Regina,” he said, his voice dropping in volume, but not in intensity. She didn’t want to stare into his wide, black eyes, but she could not look away. Until he was gone, she’d forever be under his spell—trapped by the grand illusion of love and devotion that had nearly cost her life.

“You gave me no choice, Brock. You hunted me. You caught me. But now your prey has broken free.”

He opened his mouth to speak again, but the vibration of the ground around him cut him short. The crust of the Earth split in a spider web of cracks around him. The Hunter had become the quarry about to be swallowed by the source of all witching power.

Brock gave her a nod. Had he accepted his fate? Around him, rocks burst into the air and columns of red-hot steam spiraled into the sky.

Regina locked her knees, bracing herself for his descent, but her legs shook so violently, she had to grab onto the nearest tree. When a root shot out of the ground and like a snake and slithered toward Brock, she swallowed a scream.

She wanted to stop this. She wanted to save him from a fate that rivaled death in cruelty. But despite the tears clouding her vision, Regina knew she’d acted as Guardian in the fullest sense—sacrificing her own heart in the process. The heart he’d tricked, lied-to, and broken.

The dirt-encrusted roots slid across the ground from four directions. With his eyes trained on her, Brock held out his arms to the monstrous vines. They twined around him, binding his wrists, ankles, midsection and neck. He didn’t protest, didn’t curse, didn’t speak a single word even when the roots yanked him down through the broken ground and into the tempest below.

Regina fell to the ground at the same second he disappeared. As the clearing reformed, erasing all evidence of the battle, Regina allowed herself to weep for her humiliation and for her loss. By the time she’d calmed, the clearing where she’d led Brock had returned to normal. Crickets and frogs sang in the distance. Wind rustled softly through the verdant leaves.

Except for the sound of her ragged breathing, no one who stumbled into this park on the grounds of the Registry would ever know the violence that had erupted here—all at her hand.

She shot to her feet, her muscles protesting, searching for the source of the sound.

She glanced at the ground at the center of the clearing where she’d formed the ancient circle and banished her lover to the underworld. Not even a blade of grass looked out of place.

His voice sounded hollow, as if far away. Stumbling, she made her way to the core of the clearing and pawed at the ground. It was solid. He was trapped. She’d used the forbidden curse. No magic, not even the powerful spells handed down from her ancestors, could undo his doom.

“Regina, please. You have to remember. There isn’t much time.”

Suddenly, a choking sensation gripped her. She clawed at her throat, trying to relieve the invisible pressure strangling the breath out of her. Her hands made contact with the platinum chain she wore around her neck and the metal burned.

And then, broke away.

She gasped for air. Her eyes snapped open, jolting her out of her nightmare and into the cold reality of her room. The full moon just outside her uncovered window threw blue streaks across her bed. Drenched with sweat, her sheets coiled around her body, tangling with the silk boxers and t-shirt she’d worn to sleep. Beside her, incense smoldered, injecting the air with the lingering perfume of lavender and sandalwood, meant to calm her. The herbs had failed miserably. Her heart was still trying to pound its way through her ribs. Her lungs, fed by ragged breaths, ached inside her chest.

She dragged her hand to her neck and this time, registered the absence of her talisman.

He emerged from the shadows boots first, the leather dirty and torn. His jeans, ripped at the seams, hung loosely, as if his muscles had atrophied or body weight had simply melted off his normally powerful frame. His shirt still held the stains of his injuries from their battle. Dried blood mingled with the smoky streaks of scorch marks.

All of it. Every detail. Every emotion.

With a thought, she sparked the lamp beside her bed. The glow instantly reflected off the amulet he dangled between his grimy fingers. The alexandrite, nearly the size of her palm, shined purplish red in the incandescent light. Brock had not only returned from the Middle Realm where she’d banished him three months ago, he’d stolen the talisman she’d enchanted to block the memories of him from her mind—memories wrenched from the darkest recesses of her soul. Memories that kept her from performing as Guardian.

“Give it back,” she demanded.

“So you can forget about me again? Forget what you did to me?”

“I had no choice.” She wrestled to remove the tangled sheets from her body. When she succeeded, she slid off the bed and faced him. She jutted her chin forward even as her betrayed heart screamed for her to crumble into a mottled mess on the floor. “You came to Sedona to kill me. Or did you expect I’d let you murder me simply because you’d tricked your way into my bed?”

He dropped his hand, the talisman dangling at his side. The spell she’d cast over the ancient stone of her ancestors would no longer keep the memories at bay. She had no idea how, but Brock had returned. Now, she would need her painful memories to protect the Registry. To protect her people. To protect her heart.

“Spare me, Brock! How can I accept the word of a Hunter? You were born and raised with one motive, just as I was. But while I was trained to protect my people, you were trained to destroy us. I cannot change who I am any more than you.”

Regina’s bitter laugh rent the suddenly stifling aromatic air. “You are a Hunter. How many witches did you kill before you found me, Brock? How many?”

He took a step forward, but Regina stopped him by raising her palm. As the Guardian, she possessed a rare and terrible power—the ability to harness energy and concentrate it into a ball of electric pain that she could hurl at will. The energy bursts had given her the upper hand in her battle with Brock three months ago. Why did she hesitate now?

“Regina, there isn’t time for me to explain, but I’ve come back to save you.”

“Save me from what? I survived you. What could possibly be worse?”

Brock threw Regina’s talisman on the bed, his shoulders taut and his eyes dark. A shiver rippled from the hairs on the surface of her skin to deep inside her belly.

Regina’s chest tightened under the weight of this enemy’s name.

“Old Movert is a myth. He doesn’t exist.”

Brock chuckled, but his laugh contained not a hint of mirth or happiness. “You’re wrong. Old Movert is very, very real. You’ll know that for yourself soon, when he comes here to kill you.